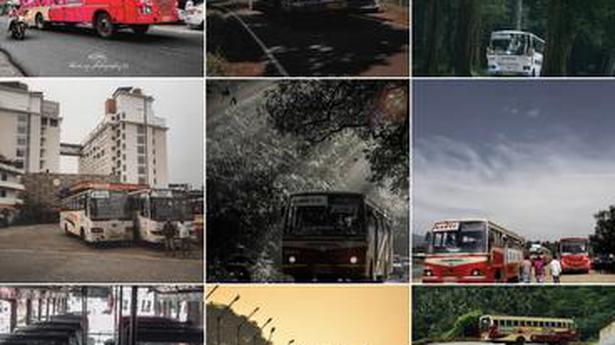 Photographs and videos are chosen with care. Drone shots and filters add to the drama. The focal point of their affection, veneration or obsession, depending on how one sees it, is unexpected: Kerala State Road Transport Corporation (KSRTC) buses, affectionately called ‘aanavandi’ (loosely translated as ‘elephant vehicle’), a reference to the two elephants in the KSRTC logo.

The aanavandi has close to 100 dedicated fan pages on Instagram, while KSRTC’s official Instagram handle has only a few thousand followers. Fans see them as a gateway to childhood nostalgia, while others see it as love born out of frequently travelling in these buses. For many, it is a mixture of both.

“My first memory of a KSRTC bus is when I was in Class V…I remember seeing the bus and thinking it was majestic. It almost seemed like an elephant walking down the road,” says Thiruvananthapuram-based Akshay Krishna. He is one of the admins of the page @ilovemyaanavandi, which was formed in 2019 and has about 36,000 plus followers.

There are photographs and videos being posted on these ‘bus fanning’ pages dedicated to KSRTC buses. “However, it is not just ‘fan’ stuff…we like to see ourselves as a resource for information: timing, routes etc. We get DMs asking for help and we even help book tickets online,” says Amal Roy of @aanavandi_ishtam. Started as a page on Facebook, it then moved to Instagram in 2017 and now has 55,000 followers.

Amal, who now works in a oil rig in Mumbai, has travelled to almost all bus depots in Kerala [there are 28], and can identify which depot a KSRTC bus belongs to. He started the page when he was a student and had more time on his hands. “Every time I board a bus, I head straight to the seat right next to the driver. If it is a long journey the conductor, too, joins in and we talk. That is how I discovered a lot of things about transportation.”

Buses and their depots, the sound of the engine — all these have made their way into the fan pages. Unlike Facebook, which relies more on textual information, the pages are more visually-driven on Instagram, most of which is contributed by followers, “For instance images of buses in the High Ranges (the hilly parts of Kerala such as Idukki) are stunning and we get a lot of those,” says Amal. The popularity of pages such as @aanavandi_ishtam invites collaboration requests. Amal says he declines these offers, “I built this page out of my passion for buses, not to monetise from it.”

No payments are made for photographs and videos, however, contributors are given photo credits. Same goes for videos, which are edited by the team for ‘dramatic effect’. “We enhance the visual… speed up or slow down the pace so that it has more masala. We also get flak for it since we are accused of glorifying rash driving. It is just spicing up the video for more hits and traction,” Akshay says.

A means of racking up ‘likes’ is through “captions that pack a punch”, thanks to cinema-inspired posts. “The captions have to be catchy…,” says Vishnu Vishwanath, admin of @ksrtc.official, from Pathanamthitta. “Compare a bus with Mohanlal or use a ‘mass’ dialogue and plenty of hashtags,” echoes @aanavandi_online’s Athul Ravi, from Thiruvananthapuram.

The pages are, usually, managed singly like Vishnu, Amal and Athul, or by a team like @ilovemyaanavandi.These pages collaborate with each other as they don’t see the others as competition. However with 100-odd KSRTC bus fanning pages, content tends to overlap. Amal says it was easier earlier when he started the page on Instagram.

“Fan pages inspired me to start the page, however the sheer number of them now works against us. Where do you go for so much exclusive content for so many pages?” says Vishnu. The key is posting actively often two or three times daily.

He delineates between followers and supporters, “If the page has 32000 followers, only around 2000 would be supporters who share, comment and like. Only if that happens does the number count.” Unlike building a fan base which takes time, losing fans is quick. “A break in posting for a few days and they just drop off,” says Athul.

Most of these pages are started by students, many of whom lose interest when they start working and get busy. “It is not easy, as there is a lot of work,” says Amal. “We get so many DMs, 200 to 300 everyday. It is impossible to respond to all, but I will keep at it for as long as I can.”