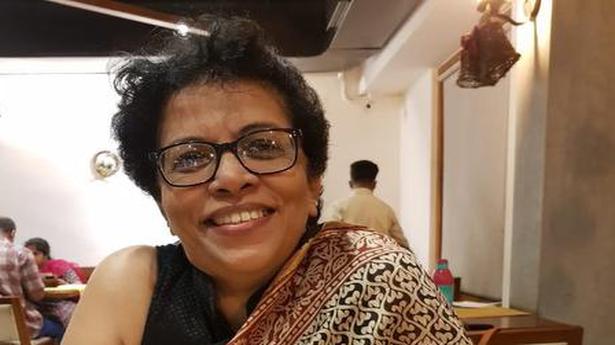 Not every teacher gets a jumbo group hug. But Mary Abraham, a.k.a. Manna Abraham, got one, literally, when she bid farewell to her work as a ‘travelling teacher’ with The Ringling Brothers and Barnum & Bailey circus in the US, promoted as the ‘biggest show on earth’.

The circus elephants’ group hug is just one of many memorable moments that Manna wrote about in a recent post in Her Trivandrum — a closed social media group for women — which went viral.

Manna joined the circus at the age of 46 and travelled with them for eight years. As the only Indian with the 145-year-old The Ringling Brothers and Barnum & Bailey circus, Manna got a ringside view of life in a circus. Eventually, the circus closed down in 2017.

“I had no idea of what it would entail when I applied for the post of a ‘travelling teacher’. Little did I think it would be with a circus, perhaps the largest in the world,” recalls Chennai-based Manna.

Mary Abraham worked as a travelling teacher with the 145-year-old The Ringling Brothers Barnum & Bailey circus in the US. Mary with her students
| Photo Credit:
special arrangement

The adventurous Manna had left for the US for a break in 2001 after putting in her papers at a school in Kuwait. She was working in a school in the US when she came across an advertisement for a ‘travelling teacher’.

She decided to apply and was appointed as a teacher for children between the ages of five and 18 in 2004. “Either their parents were performers for the circus or the children were performing different acts. The classes were mandatory according to the Department of Education in the US. I taught all grades (1 to 12) and all subjects,” explains Manna over phone from Chennai.

Mary Abraham who worked with the 145-year-old The Ringling Brothers Barnum & Bailey circus as a travelling teacher holds an open house for her students’ parents
| Photo Credit:
special arrangement

The newly-appointed teacher was given a room to herself with a minuscule kitchen and an attached bath on a mile-long train, the longest, privately owned one in the US. As she enjoyed Indian food, Manna cooked chicken, rice and all kinds of Indian food that many of her co-workers came to enjoy.

While the manager and those higher up in the hierarchy of the circus had entire compartments for their use, those looking after the animals, cleaning their cages, and so on had bunk beds on the train, elaborates Manna.

Aboard the train were acrobats, jugglers, clowns, high-wire and tightrope walkers, lion tamers, animal trainers and an entire menagerie of animals like lions, tigers, zebras, horses and elephants.

“There were people from 27 nationalities on the train, acrobats from China, performers from Russia, Chile, Colombia, Brazil…. The train on which we travelled had about 300 people on board most of the time,” she says.

Whenever the train stopped in a city for a show, Mary would hold her classes in a room or a space allotted for her at the arena. She recounts how she would complete her lesson plans and prep for the classes while they were travelling. There were children who spoke different languages and not all of them understood English, the medium of instruction. Manna would request older students who spoke a smattering of their native language to help children understand instructions. At some places, Manna organised an exhibition and put up the work the children had done during the class hours. She was expected to take care of their books, school work and other school-related matters. Inspectors from the Department of Education would drop in for surprise checks to ensure that classes were going according to schedule.

Manna travelled to 48 of the 50 states of the US and managed to explore many of the places too. As she travelled she connected with family and friends who picked her up from where the circus had a show and took her to see tourist attractions. “Those eight years got rid of all my prejudices and fears about people. At the end of the day, we were all people trying to earn a living,” asserts Manna.

She remembers how she mentioned in her class that she was afraid of clowns. It turned out that one of the teenagers in her class worked as a clown. “The next day, he came to class wearing the red nose and with his face half painted. He wanted to show that it was the same person, on and off the ring. To placate him, I went to see the show and eventually got rid of my fear of clowns,” she narrates.

Each show would be different and come with its set of challenges. Manna got to see the preparations and rehearsals that were so important for the success of the shows.

The mile-long train of the The Ringling Brothers Barnum & Bailey circus. The circus travelled from place to place in this train for shows in different cities in the US

After every show, she says there were parties and barbecues. However Manna was not a frequent party hopper as she often had lot of work to complete and wanted to be a role model for her students.

She says with pride that many of her students still keep in touch with her, though she returned to India in 2013.

As a qualified counsellor, Manna was sought by some of the parents and performers to help them sort out personal issues. “It was a world in itself. There were marriages, births, deaths, break-ups, tiffs and heartbreaks,” she says. “The eight years were some of the most memorable years of my life.”