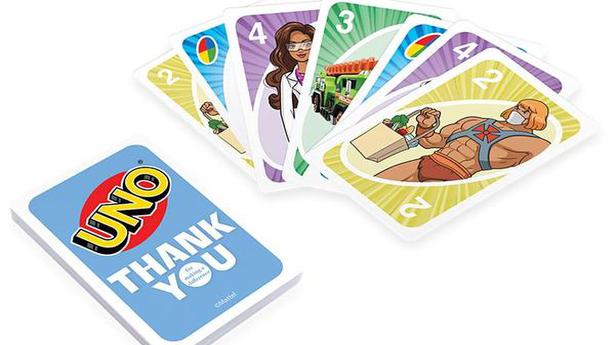 Would you like to add a deck of UNO cards featuring your favourite superheroes to your games collection? If yes, here is your chance to get hold of the limited edition cards that feature all the Mattel characters as frontline workers.

Recently launched by Mattel Toys as part of its global Thank You Heroes initiative, it is “a tribute to all the workers who play a critical role to fight the pandemic,” according to Lokesh Kataria, marketing head at Mattel Toys (India).

Mattel has associated with GiveIndia — a donation platform — for this initiative, and a part of the sales proceeds will be donated to its partner NGOs, which will then be used to provide essential supplies, equipment and other resources for the workers. The deck has 112 cards made of paper with a protective UV coating. Some of the popular characters included are Barbie, who is depicted as a medical professional; He-Man as a grocery delivery boy, Polly Pocket as a scientist and Hot Wheels as rescue vehicles.

Other than the UNO cards, the Thank You Heroes initiative earlier launched the FisherPrice line (a collection of 16 dolls), Matchbox (automobiles like ambulances, garbage trucks, news helicopter etc used by the frontline workers), and two building sets called Mega Construx. “It has only been two weeks since the launch of the UNO cards and the response has been great,” Lokesh adds.

The Thank You Heroes UNO Cards are available on Amazon for ₹149.