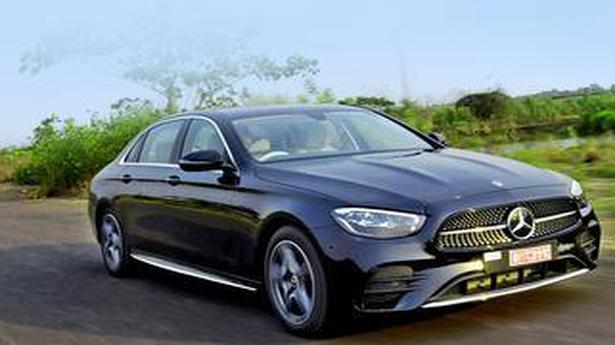 The vehicle is as enjoyable from behind the wheel, as it is from the back seat, with little to complain about the overall package

Mercedes has rolled out the facelift for its fifth-gen E-Class in India, with the E-Class in its long-wheelbase avatar and the options of four-cylinder petrol (E 200) and diesel engines (E 220d), and a six-cylinder diesel (E 350d). So, what is it like?

The E-Class’ visual makeover is no mere nip and tuck job. Mercedes has grafted in a new grille, headlights and slimmer tail-lights to align styling with the very latest models, and the visual effect is impressive. The 5m-plus E-Class looks as regal as ever but there is a hint of sportiness too now. Offered exclusively in a new AMG Line trim, the E 350d is identifiable by its bolder grille, sportier bumpers and attractive 18-inch AMG rims.

Among the updates inside is the new three-spoke steering wheel with upgraded touch panels to operate the central infotainment screen and digital dials. The touch sensitivity is improved over the older E’s steering buttons, but some controls still seem a bit fiddly.

The E 350d is unique for its Cream and Tropez Blue interior theme, with the upper dash and door pads finished in the same blue shade. While it looks distinctive, it might not be to everyone’s taste, and may not work well with some exterior colours.

If there is an area that the E-Class continues to ace, it is comfort. The front seats are excellent, though it is the rear seat that will interest most buyers. There is tremendous legroom, thanks to the long wheelbase. The seat back is reclinable by 37 degrees and the pillow-like head restraints add to the comfort factor. While there is space for a middle passenger, the rear seat is best experienced by two occupants, with the massive centre armrest folded down.

Curiously, there is only one rear cupholder positioned on the centre console. Another downer is the efficacy of the air-con system at the back, which does not cool the cabin quickly enough. However, you do get the option of pre-cooling your car in advance using the Mercedes app on your phone. The updated tablet in the rear armrest also lets you operate certain functions of the touchscreen up front.

There is plenty by way of kit too, but what is missing is powered operation for the boot lid, and while the spare wheel sits below the boot floor, the luggage space itself is quite limited.

As mentioned, there are three engines on offer, though with us here is the six-cylinder E 350d diesel. The mill is the same in-line six that also powers the S-Class, GLE and GLS, but this is the first time one can experience it on the E-Class.

The unit develops 286hp and 600Nm of max torque, but it is the engine’s refinement that gets you first. It is very quiet at idle and even on the go, the slightly grainy sound from the engine bay is unobtrusive. Performance is expectedly brisk, with easy access to power all through the rev. Playing its supporting role incredibly well is the 9-speed automatic gearbox that works with honeydew smoothness.

The steering is well-weighted and precise, and for a car so large, the Merc is quite easy to drive. The 350d’s air suspension is absorbent and cushy at town speeds in Comfort mode, but up the pace and it feels floaty. Sport is your go-to suspension setting for faster journeys. It arrests unnecessary up and down movements and generally makes the big E feel more tied down.

Also to be kept in mind is that the air-suspension-equipped E 350d is also prone to touching its belly on large speed breakers, so it is prudent to raise the suspension height via a button on the centre console in advance.

This range-topping E 350d (₹₹ 80.9 lakh) is a stretch, but the added outlay also gets you a properly strong engine and the enhanced comfort of air suspension. This is a car that is as enjoyable from behind the wheel, as it is at the back seat. The new look is also impactful and there is simply little to complain about the rest of the package.

The E-Class has long been the default choice for large luxury sedan buyers in India. With the latest updates, the proposition has gotten stronger still.