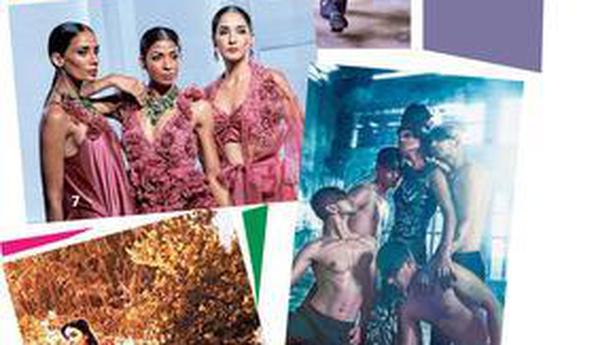 The first digital RTW fashion shows told a collective story of a country struggling with the Covid pandemic. Here is the script

Just like artists, fashion designers are bad liars. They can drape you in luxurious silks and velvets, make flowers grow from mere fabric, and sculpt statues with corsets and capes, but they cannot hide their hearts. Their work is, and must always be, seen in context of the time and place in which it is created.

So how did the first digital RTW fashion week in India — the Lotus Make-up India Fashion Week (LMIFW) organised by the FDCI — fare on this scale? Creatively, it passed with flying colours, even while painting a bleak vision. The collections, reader, are the first ones designed and produced within the timeline of the global Covid-19 pandemic. This is a sobering first. And they came together to tell a story, which I will do my best to tell you.

In the beginning, there was the Pandemic. And discarded oxygen cylinders as tall as people were seen everywhere. Models in Rajesh Pratap Singh (61.9K views) walked among them in hospital-white smocks and shirt-dresses, raised necklines covering half their faces. Multicoloured patchworks became block-printed and foiled tunics, as if some enterprising, post-apocalyptic tailor had taken beautiful scraps from the artisans of Jaipur to preserve the art. The young label Bloni (30.6K views) proposed an Industrial style for going out in small groups. Slick, easy separates with reflective finishes and the glamour of oversized sequins showed the way the new generation of influencers would dress to impress.

The mood in Delhi though, according to Shantanu and Nikhil Mehra’s collection for S&N (58.7K views), had changed entirely. In the past, India had been a Democracy. But in 2034, the ‘High Chancellor’, ‘Cabinet Leaders’, and the ‘Head of the Imperial Secret Service’ ruled with an iron fist — dressed in martial uniforms, a design discipline that our former colonisers, the British, once prided themselves over. Asymmetric drapes, fluid capes, camp sunglasses, and military caps, all festooned with make-believe badges, braids, and epaulettes: these became the modern military regalia for those who never did enlist. And an AI took over the running of the country.

The rich, though, seemed unaffected. Draping themselves in digital prints of Renaissance masterpieces from Shivan & Narresh (35K views), and dressed in tiered gowns from Nidhi Yasha (23.7K views), they escaped — mentally, physically, and because they could — to seaside locations. This follows a very real phenomenon seen in recent months, of people from the twin capitals escaping to Goa. Delhi may be the political power center and Mumbai the business core, but this quaint southwestern Union Territory has become the Pandemic Capital of India. Those who live here dress in bright colours, riotous prints, and opulent fabrics, reminding themselves that there is something good in the world.

Still, the days continue to dawn, and everyone needs a light touch. So a few remained to provide hope. Like Varun Bahl (44K views), with his delicate dedication to flowers. Made with fabric and sprinkled judiciously onto silken slip dresses and kimono-inspired wraps, these miniature artistic blossoms evoked nostalgia for a generation that actually remembered better times. At Gauri & Nainika (41K views), flowers became prints, and grew into oversized blooms covering the entire body in petals of silk and organza and taffeta.

Like the end of any post-apocalyptic movie, the global south, represented by Africa, also had its moment this season. Ashish Soni, who spent his growing-up years in Zambia’s Kitwe province, took on this task. Zambia may be one of Africa’s safest nations today, but when Soni was there, he remembers living behind steel reinforced doors, with guard dogs on duty. Six of them.

As his digital show began (32.8K views), a note clarified that it was not a human rights campaign, but a personal pledge towards the inclusion Black people deserve in the fashion community. Did what followed reflect Soni’s intentions? With a cast of exclusively Black models walking to voice recordings of speeches by Black leaders and victims, it seemed to, at least at that level. But the clothes — slick tonal jacquard jackets, deconstructed textures on bombers, layered skirts worn over sneakers and leggings — seemed somewhat accidental to the narrative. And the question still lingered, as it does at the end of such movies, if this was really the beginning of a New World Order.

Note: The number of views mentioned is from the Instagram handle of the Fashion Design Council of India, the official host platform for the designers’ presentations.