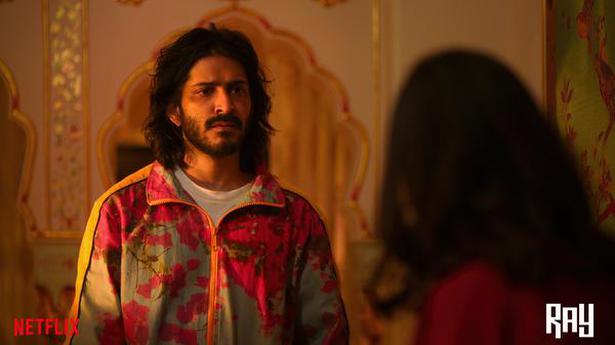 Vasan Bala and the cast of ‘Spotlight’, led by Harshvardhan Kapoor, Akansha Ranjan and Chandan Roy Sanyal, decode the layered drama about the magic and madness of movies

In Vasan Bala’s Spotlight, part of the Netflix anthology adapted from Satyajit Ray’s short stories, a popular actor, Vikram Arora, played by Harshvardhan Kapoor, is crippled with artistic insecurity despite his career being on an upswing. His professional anxieties get progressively worse when the hotel that he’s staying at is pretty much hijacked by a religious leader, Didi (Radhika Madan), who commands outsized influence on politicians, business leaders, film producers and the general populace. In the course of the film, Kapoor’s character must come to terms with the limitations of movie stardom and the realisation that between cinema and religion, two factions that enjoy a colossal hold over the Indian psyche, religion will always trump the former.

While the film has an undercurrent of dark commentary, the treatment itself is lighthearted and Bala, who earlier directed the festival darling Mard Ko Dard Nahi Hota, peppers the narrative with a variety of inside jokes. For instance, Kapoor’s manager, played by an astute Chandan Roy Sanyal, takes a dig at Inlaks, a housing society in Mumbai’s Versova, known for aspiring actors who are yet to break through, as well as Scrumptious, an eatery nearby largely frequented by the same crowd. In the film’s context, Sanyal’s dig is at the star who’s refusing a lucrative part that will bring in the money, the suggestion being that if he doesn’t take the gig, he may have to go back to the life of a ‘struggler.’

“It was a line improvised by Chandan,” Bala, whose last film too was seeped in cinephilia, says over a Zoom call. “All the cinephilia is almost like a personal trip for me. If nobody finds out (the references) it’s fine, the story will still hold on its own.” Which it does, except it’s a much more joyful experience once the jokes are understood. Kapoor, who plays an actor grappling with stardom, says that he was thrilled to have that experience, as it’s something that has, so far, eluded him in real life.

“He (Vikram Arora) has captured the imagination of the paying public in a way that I haven’t done. I enjoyed living in that world. Actors are an insecure lot. The job entails failure, rejection and insecurity. The call from Vasan came during the first wave when everybody was anxious about the future, grappling in uncertainty. So I ended up channeling that nervous energy into the part.”

A little bit of Entourage

Kapoor points out two characters — Johnny Drama and Vincent Chase — from the show, Entourage, also about the life of a Hollywood star and his coterie, which percolated into Spotlight. While the film draws parallels between a cult leader and a movie star, another aspect that runs through the narrative is the cost of fame and how debilitating it can be psychologically for those who live and die under the constant glare of the public eye. As an artist, does Kapoor crave that popularity personally?

“Honestly, that power would just liberate me to do films like Spotlight, Bhavesh Joshi and AK vs. AK. I told Vasan this: I only don’t want to be an option for you when you’re making a film with a ₹5 cr. budget. I also want to be an option when you’re making a ₹50 cr. plus film. If I’m lucky enough to achieve that kind of power, I’d want filmmakers to tell different kinds of stories at a bigger scale. That really can be the best by-product of stardom.”

While that’s a noble aspiration to chase, the flip side could be that stardom could imprison the star, making them a victim of their own image. One of the reasons why we see a lot of top stars repeat what they’ve done in the past is because they chase stories that serve their stardom and not the other way round.

“That’s a good point. Given the lineage that I come from, I have felt that weight. But I haven’t let that affect my choices, whether it was doing a film festival musical as my first film or a vigilante drama disguised as an action film as my second or that part in AK vs. AK.”

Chandan Roy Sanyal, who plays the manager of Vikram Arora says he did draw some nuances from Ari Gold, the agent character from Entourage, but his primary source was Asrani’s character from Hrishikesh Mukherjee’s 1973 film, Abhimaan and Rabi Ghosh, the Bengali actor who did several films with Satyajit Ray.

Akansha Ranjan Kapoor, who plays Anuya, Kapoor’s partner, and acts as his moral compass and a voice of reason, says that Bala isn’t a director who rehearses too much. The idea is to be on set and react to the moment. Even their interpersonal dynamic reflected in the film is the way it really is.

“Harsh knows so much about cinema and I’m pretty blank. I think that method found its way into the film,” she says. To this, Bala adds, “With Vik and Anuya, what I really like is that one is trying to be an artiste but is unfortunately popular and hence the problems in his life. Anuya doesn’t have such issues. She’s pragmatic, wants to earn her money and live her life. She’s not even having those artistic battles. She sleeps better and he doesn’t.”

Which brings us to a long unanswered argument that the film dabbles in. Does great art inherently come at the cost of sacrificing popularity and mental peace? “It’s a classic choice,” Bala says. “Till things are working for you, it’s great. There’s Barfi, there’s Rockstar...all happening at once. And then comes Bombay Velvet and people like me come in,” he laughs, referring to Ranbir Kapoor’s career that took a brief nosedive with the Anurag Kashyap directorial. Vasan was one of the writers of the 2015 film. “When you’re used to popularity and fame and a certain kind of life, the shift is very difficult. It takes a lifetime to balance it out. Either you chase stardom or the stardom chases you.”

Ankur Pathak is a writer based out of Mumbai, who was formerly the entertainment editor of HuffPost India.