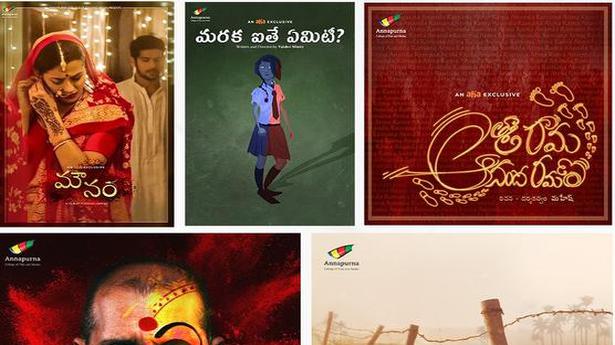 Five alumni of Annapurna College of Film and Media were in for a pleasant surprise when they learnt that their short films, made as part of their graduate programme, will be streamed on OTT platform Aha for public viewing.

To kick start this initiative, five short films began streaming on October 16. Here’s an introduction to the filmmakers and their short films:

The 2018 undergrad alumni of Annapurna shot this film in January-February 2018, focusing on the dilemma of going abroad for better career prospects as opposed to staying back in India in the company of loved ones. “The idea triggered when I learnt that our late President APJ Abdul Kalam preferred to work with DRDO and ISRO and turned down an offer from NASA. In my film, one character is torn between going abroad and staying back. He has a newborn baby and elderly parents and won’t be able to spend time with them if he goes abroad,” says Mahesh. The budding filmmaker brought in aspects from mythology to give depth to the story, drawing parallels to conversations between Krishna and Arjuna in Mahabharata.

An alumna of the 2019 masters’ batch, Uthkarsha took a leaf out of her childhood memory for her graduation short film. The Bengaluru resident remembered being privy to a ‘Bootha kola’ or spirit worship ritual practiced in coastal Karnataka. She used that ritual as a tool to address relationship issues. “We filmed in areas around Hyderabad like Chilkur, and Bapatla in Andhra Pradesh to get that coastal atmosphere. My film was in Kannada, titled Naan Devullu (I am God) and when Aha chose this film for streaming, our college generously took up the responsibility of dubbing it in Telugu,” she says.

Currently working as an assistant director for a Kannada film, Uthkarsha has used the lockdown to write new content for series and feature films.

Allahabad-bred and now Chennai-based Purvangi looks back with pride at her graduation film Chuppi (Hindi), which addresses the need for sexual education for children, albeit in a lighter vein. “Rather than a heavy, preachy film on the subject, I thought why not make a family-friendly humorous film that can be a conversation starter,” she says. The 2019 graduation batch alumni made Chuppi as a crowdfunded film and the idea was to not make it depressing or dark. “We have been missing conversations about sex education in our homes for generations. I believe that one has to talk to children openly, sensitively about sex,” she says.

Chuppi was dubbed in Telugu as Mounam by Annapurna college fraternity for digital streaming: “When I worked on the film, a lot of people said I should have picked up another idea. But it’s heartening that my film was chosen for streaming,” says Purvangi.

The 2016 alumnus’ film Varnamala is a period drama in the early 1900s, in the backdrop of the zamindari system and deep-rooted class biases. He had shot this film in 2014 in the vicinity of Ramoji Film City and Kompally in Hyderabad, where he found a few locations that were bereft of urbanisation. “The story explores the tussle between a cruel village head who upholds untouchability, and his benevolent son who wants to change the age-old practices,” explains Venkat. The aspiring filmmaker is now assisting director Krish on his new Telugu period drama.

Now based in Surat, Vaishvi recalls how she approached several schools in Hyderabad, seeking permission to shoot her short film in their premises. Many were reluctant, one yielded. She needed to shoot at two schools and finally knocked on the doors of her alma mater in Surat. The subject: The contrasting stories of how two families approach the menstrual travails of their adolescent daughters. Originally titled Sort the Spot, the film was dubbed in Telugu for digital streaming. “The parents and the young girls were extremely cooperative and without their help, I couldn’t have made this film. Many girls face these situations in school while growing up, unknowingly staining their clothes. How their peers and parents react to such a situation makes a huge impression on the girls,” explains Vaishvi. When many schools in Hyderabad were reluctant to allow filming this story in their premises, Vaishvi was all the more determined to put the story out.