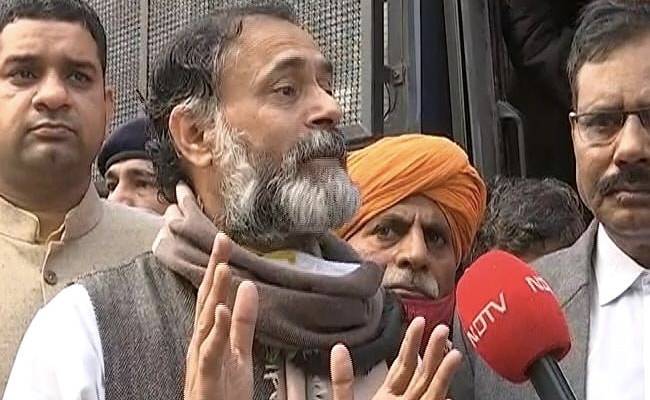 Yogendra Yadav was detained by Haryana Police at Gurugram today.

Swaraj India chief Yogendra Yadav, detained by the police at Haryana’s Gurugram, questioned if the coronavirus pandemic was the cause for crackdown on protesting farmers, why wasn’t it an impediment to the Bihar elections or a recent rally by Haryana Deputy Chief Minister Dushyant Chautala. “It is a very strange pandemic,” he told NDTV, in a jibe at the state’s BJP government led by Manoharlal Khattar.

“Three days ago, Dushyant Chautala rallied thousands of farmers. No mask. No social distancing. Then there is no pandemic. Bihar election – no pandemic. When farmers gather, then there is a pandemic. This must be a very strange disease,” he added.

The Haryana government, which has been using water cannons, tear gas and riot vehicles to stop thousands of farmers marching towards Delhi, has cited the pandemic as a reason for its objection to the march. Since yesterday, it has declared prohibitory orders banning large gatherings in parts of the state.

The state police, while detaining Mr Yadav, had cited violation of prohibitory orders.

“The tactics being used by the government was similar to those used by the British against Indian nationalists,” Mr Yadav told NDTV, underscoring that like the freedom fighters in Bengal who fought for India’s and Bengal’s Independence, the farmers of Punjab were fighting for farmers across the country.

Asserting that the government is becoming “panicky”, he said it is because the protest over the Centre’s new farm laws is becoming a “nationwide agitation”.

Farmers from six states — including BJP-ruled Haryana and Uttar Pradesh — had decided to march to Delhi on Thursday and Friday, demanding that the three new far laws, which the Centre calls historic reforms in the farm sector, be repealed. The march has the support of more than 500 farmer organisations across the country.

But the rally was stopped at the borders of the BJP-ruled states like Haryana and Uttar Pradesh.

Punjab farmers, who were stopped at the Haryana border, clashed with the police at a narrow bridge. Dramatic visuals from the spot showed them toppling barricades into a river and throwing bricks and stones.

Delhi Chief Minister Arvind Kejriwal, whose government had refused permission for the rally, tweeted this morning saying peaceful protest is a “constitutional right” of the farmers

“The farmers are protesting against all three laws by the centre. Instead of taking this bill back, the farmers are being stopped from protesting peacefully. Water cannons are being used on them. Such kind of injustice on farmers is not fair. Peaceful protest is their constitutional right,” Mr Kejriwal tweeted.