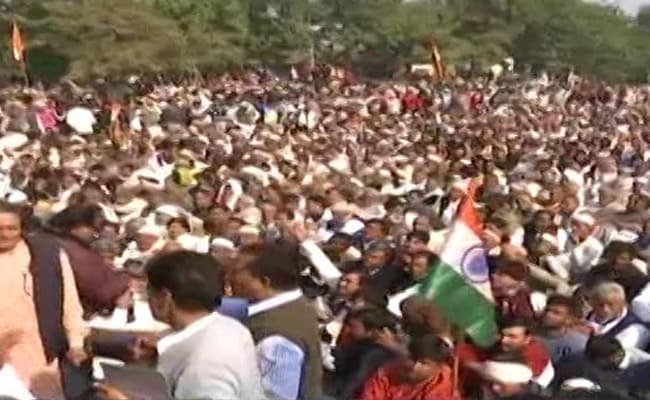 Permission has been denied to a farmer’s Mahapanchayat or meeting
in Uttar Pradesh’s Shamli by the district administration, which has also banned large gatherings till April 3. The Bharatiya Kisan Union, a farmers’ body, the Rashtriya Lok Dal among other organisers, however, have said they will go ahead with the meeting against three controversial farm laws tomorrow despite the administration’s refusal.

The RLD, which has been actively protesting the farm laws, has helped plan and organise a series of meetings across Uttar Pradesh between February 5 and February 18, along with the Bharatiya Kisan Union, to back the protests near Delhi’s borders that began late November. Thousands have been camping on the outskirts of the national capital, seeking repeal of the three laws cleared by parliament in September.

This comes amid tremendous outpouring of support to the agitation on social media where international celebrities, including pop star Rihanna, climate activist Greta Thunberg, and US and UK lawmakers have thrown their weight behind the farmers.

Large gatherings will remain banned in Shamli between February 4 and April 3, the district administration said in a statement, referring to Good Friday, Mahashivratri, Holi, which will fall during this period, and exams likely to be held by many institutes. The order also refers to the protests being held by many farmer groups.

Last week, thousands had gathered for the Mahapanchayat or meeting in Baghpat’s Baraut in Uttar Pradesh. Another meeting was called by Bharatiya Kisan Union leader Naresh Tikait in UP’s Muzaffarnagar, less than 150 km from the Ghazipur border near Delhi – one of the epicentres of farmers’ protests.

The meeting was called a day after a tense standoff when the UP administration tried to evict the protesting farmers from Ghazipur. The video clip went viral and resulted in hordes of farmers making an about-turn and returning to Ghazipur to rejoin the protest.

The farmers are demanding that the government cancel three new laws that they believe will hurt their income by taking away guaranteed minimum prices and by leaving them vulnerable to corporates. The government says the laws bring long overdue reforms in the agriculture sector, and will allow farmers to sell their produce anywhere in the country for competitive prices.

Andhra Sets Record With Over 1.3 Million People Vaccinated In A Day

New Delta Plus Variant Could Cause Faster Surge In India, Warns AIIMS Chief