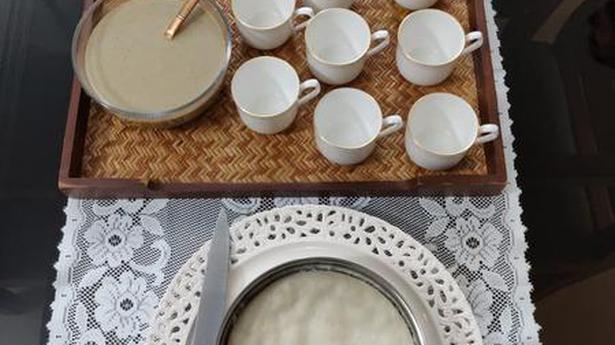 ‘Pesaha’ appam, an unleavened bread made of rice flour, is cooked in many Christian households

For Marina Charles, the flavours of Lent are unfermented, steamed Indri appam, Pesaha appam and kurukku, made at her home in Thiruvananthapuram. That was not all. “Since my mother, Thelma Gomez, hails from St. Andrews near Menamkulam in the capital city, she also used to make sweet hot cross buns, rich in spices like nutmeg, cloves, cinnamon and all-spice powder. St Andrews had a unique culture with traces of Portuguese influence and so she used to bake the hot cross buns for Easter. My paternal grandmother, Lydia Gomez, was the one who made the Indri appam (or Pesaha appam) and kurukku, which is also called pesaha paal,” says Marina, a popular cookery instructor and blogger settled in Bengaluru.

As with all things food, each region and Christian denomination in Kerala has its own flavours for Lent. What is common is the simple food that is usually served on Maundy Thursday and Good Friday after the church service is over. While it is invariably kanji (rice porridge) and payar (green mung) on Good Friday, on Maundy Thursday it is the Pesaha appam, an unleavened bread made of rice flour that is cooked in many Christian households all over Kerala.

Lent is a period of fasting, prayers and abstinence for many Christian families. Although Easter eggs and bunnies are getting increasingly popular, many families continue the tradition of making or buying Pesaha appams. “Although we make Easter eggs, cakes and hot cross buns, what is much in demand is the Indri appam that is served on the day of Maundy Thursday,” says Reina Thomas, one of the partners of Square One Homemade Treats, a popular bakery in Thiruvananthapuram.

Marina says that since cakes are easier to make, many of the ethnic snacks that were traditionally made during the Holy Week have been forgotten as they involve a great deal of time consuming, laborious stirring and cooking, mostly with rice flour. To keep the tradition going, Marina makes it a point to make the Indri appam every year.

Preethi Abraham, a home cook, recalls that during her childhood in Ranni, Pathanamthitta, the service on Maundy Thursday used to be early in the morning at around 3 am. The Indri appam, made with rice flour and urad dal, was steamed, either in leaves like an ela ada or in a vessel. “The Cross that we got for Palm Sunday is pressed into the middle. In the evening, after prayers, the eldest in the family would bless the appam, cut it and serve it to the others for dinner. It is dipped into a syrup that we called kuruma, also called paal in some places. The paal is made with jaggery and coconut milk,” says Preethi. Nowadays, Preethi cooks the paal and a friend of hers makes the appam and they share it.

Wayanad-based Babu Stephen, son of YouTuber Annamma Pulivelil aka Annamma chedathi (Annammachedathi Special) explains that in their parish, the Indri appam is steamed in banana leaves while the Pesaha appam is called Kurishu appam as it has the palm leaf cross embedded in the middle.

“All my siblings, and our children gather at our house since my mother stays with us. After prayers, it is the kurishu appam, made with a little sugar, that is cut by the eldest in the family and shared amongst all of us. Usually, after the service, this sharing of food was done in the church. This time, in accordance with the COVID-19 protocol, all of us in our parish have been told to conduct the prayers at home after the service,” says Babu.

In many homes in Kollam, the dough, made of rice flour, coconut and jaggery, is filled in vayana leaves (bay leaves) folded into cones and steamed, says Jessie Ignatius, a former school teacher from Kollam. “However, my mother in Thrissur used to make ‘pulikatha appam’ (unfermented appam) made without yeast. It is made with rice, urad dal, shallots and coconut and made as soon as the mixture was ground. My mother used to make the kurukku with rice powder, coconut milk, jaggery, a bit of ghee and roasted cumin. I used to love the flavour of the cumin in the kurukku,” she says.

Marina says that some people might add a bit of jaggery to the Pesaha appam and that gives it a brownish tone. And the paal could be seasoned with cardamom too. “Kalathappam, a bread made in a pot, is also made on Maundy Thursday by some families. Made of rice flour and lightly spiced, there were fried shallots and coconut in it,” she says.

The flavouring agents and the names might differ but not the solemnity of the occasion when families break bread together for Maundy Thursday, symbolising the Last Supper of Jesus Christ.

Soak urad dal for 30 minutes and grind it into a smooth paste by adding little water. Grind coconut (don’t grind the coconut to fine paste) with garlic, small onion and jeera with little water. Add salt and boil water and when it starts boiling add rice powder, little at a time and mix well. Now add the dal mixture and coconut mixture and mix well. Transfer the batter to a greased pan and place a cross made with palm leaves. Now steam for 20 minutes. Cool it and transfer to the serving dish.

How to make paal

Melt jaggery (200 gm) with water and strain it. Add the thick coconut milk (4 cups) and stir for few seconds, don’t let it boil. Take it off the stove and serve cool.