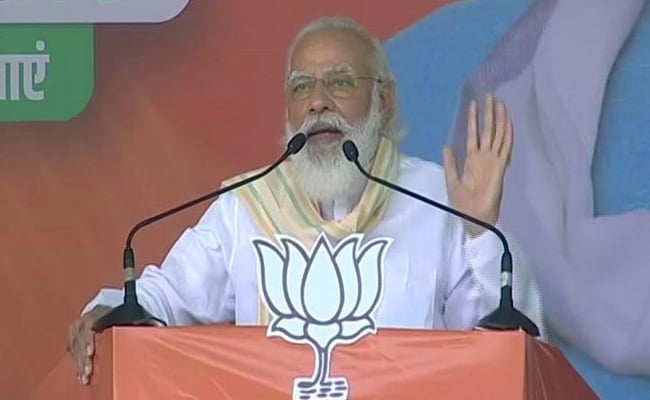 For the second time in as many days and third time overall, Prime Minister Narendra Modi – in Bihar to campaign for the NDA – eschewed questions of development posed by the opposition to attack them over their stand on the 2019 Pulwama attack. Referring once more to comments by a Pakistan minister earlier this week, he declared the “mask (of) those who were spreading rumours” had been removed.

The Prime Minister accused the opposition of practicing “politics of power and selfishness… to spread a lot of confusion”, and slammed them for seeking votes from Bihar voters after questioning the bravery of those serving in India’s armed forces.

“Just two-three days ago our neighbouring country accepted the truth of Pulwama. This truth has removed the mask from the faces of people who were spreading rumours after the attack,” Prime Minister Modi said at an election rally in Bihar’s Chhapra.

“The valor of the brave sons and daughters was not doubted in Bihar or anywhere in the country, but those who do politics of power and selfishness tried to spread a lot of confusion,” he added in comments nearly identical to those he made in Gujarat yesterday.

PM Modi accused the opposition of ignoring “misery” and not being concerned over the lack of employment opportunities in the state to say “everything that broke the morale of our soldiers”.

Yesterday too he accused the opposition of “politics of selfishness” and said “some people were not part of the grief (over the death of 40 CRPF soldiers in the Pulwama terror attack)”.

Opposition leaders Tejashwi Yadav of the RJD and Randeep Singh Surjewala of the Congress both tweeted in response to the BJP’s attack.

Mr Yadav – the chief ministerial face of the mahagahtbandhan – did so by dismissing the attack and asking, once more, that the Prime Minister explain Bihar’s 46.6 per cent unemployment rate.

Mr Surjewala has posted videos on Twitter, mocking the BJP’s obsession with Pakistan. In one such video he said: “Every time the BJP senses defeat, Modiji and the party go to the shelter of Pakistan.”

The Prime Minister and the ruling BJP have jumped on the Pakistan minister’s comments about Pulwama, even as the JDU-NDA alliance in Bihar fights for re-election, with Chief Minister Nitish Kumar facing tough questions on unemployment and a lack of development in the state.

Union Ministers Prakash Javadekar and Ravi Shankar Prasad have both also hit out, with Mr Javadekar demanding an “apology” from the Congress. In response, Congress MP Shashi Tharoor questioned the need for one when his party only expected the government to keep soldiers safe.

On Thursday Pakistan minister Fawad Chaudhury said: “Humne Hindustan ko ghus ke maara(We hit India in their home)”. He later claimed to NDTV that his statement had been “misinterpreted”. “Pakistan doesn’t allow any terrorism, I was misinterpreted,” he said.

The Pulwama attack – which took place weeks before last year’s Lok Sabha election – and the ensuing air strikes by the Air Force, triggered political sparring over a narrative built by the BJP around a tough policy against terror that the party repeatedly raised during campaigning.

The Congress and Left, who are in alliance with Tejashwi Yadav’s RJD in Bihar, were among several who accused the BJP of capitalising on the issue.

Bihar votes in three phases for a new Assembly. The first phase was held last week. The second and third will be held November 3 and 7, respectively, with results due November 10.