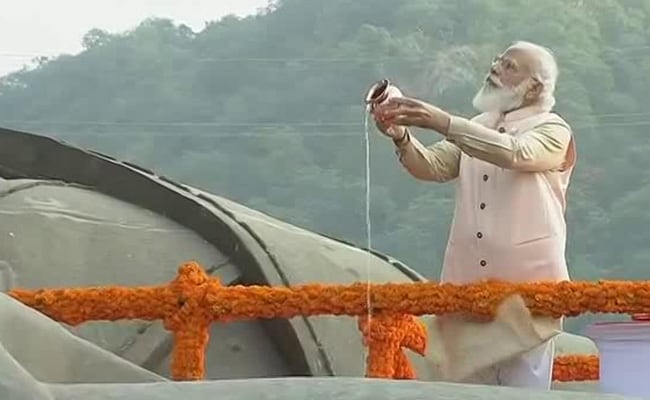 Prime Minister Narendra Modi paid rich tributes to Sardar Vallabhbhai Patel this morning on his 145th birth anniversary at the Statue of Unity in Gujarat’s Kevadia, hours before he was set to inaugurate the Kevadia-Sabarmati seaplane service.

On the second leg of his two-day visit to his home state today, PM Modi is scheduled to participate in a number of other public functions in Gujarat.

The day began with the offering of floral tributes at around 8 am to the First Deputy Prime Minister of India at the Statue of Unity in Kevadia. Shortly after, he read out a pledge towards strengthening and maintaining the nation’s unity and internal security.

This was followed by the Rashtriya Ekta Diwas parade and address the gathering.

Around 10 am, the Prime Minister was set to virtually address Civil Services Probationers. Following this, around 11.30, he will inaugurate the water aerodrome at Kevadia and a Seaplane Service from there to the Sabarmati Riverfront. On arriving at the Sabarmati Riverfront in Ahmedabad, he will then inaugurate the water aerodrome there, along with the seaplane service to Kevadia.

On Friday, he had flagged off the Ekta Cruise Service, a ferry ride from Shrestha Bharat Bhavan to the Statue of Unity in Kevadia. The 40-minute ride can be covered by a boat that can ferry 200 passengers at a time.

He also inaugurated the Sardar Patel Zoological Park, popularly known as Jungle Safari, in Kevadia, near the Statue of Unity.

The other facilities he threw open during his visit on Friday include the Ekta Mall and Children’s Nutrition Park in Kevadia besides a medicinal park, Arogya Van, with hundreds of herbs and plants.