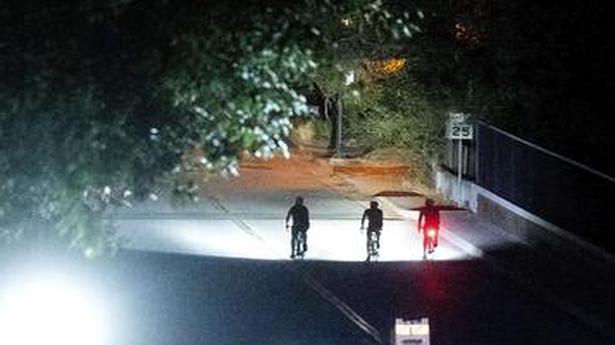 People have been buying generators, electrical cords, flashlights, batteries, gas cans and other supplies to help them deal with the latest outage, expected to last through Friday evening.

Thousands of people in wine country were without power Thursday amid a fall heat wave that brought another round of extreme wildfire danger to large portions of already battered Northern California.

Pacific Gas and Electric cut power starting Wednesday evening to more than 45,000 customers — about 100,000 people — mainly in the Sierra Nevada foothills and the San Francisco Bay Area. Some restorations began Thursday afternoon, and by evening the number of customers without power was about 30,000, the utility said. All power was expected to be restored by Friday night.

Many in wine country north of San Francisco were feeling drained by what seems like a never-ending wildfire season in the region.

Kathleen Collins has had to evacuate her home in the mountains of Napa County four times in the past five years because of fires. This summer, she lived in a motel for two weeks after leaving her home when a massive cluster of fires reached her tiny community of Pope Valley.

“It’s all very stressful. People are not happy, but there’s not much they can do about it,” said Collins, assistant manager at Silverado Ace Hardware store in Calistoga, a Napa County town of 5,000 people who were allowed to return home just last week after the Glass fire forced them out last month. The blaze that ravaged areas of Napa and Sonoma counties was contained Wednesday after destroying more than 1,500 homes and other buildings.

People have been buying generators, electrical cords, flashlights, batteries, gas cans and other supplies to help them deal with the latest outage, expected to last through Friday evening, Collins said.

More than 8,500 wildfires have burned more than 6,400 square miles (16,000 square kilometers) in California since the start of the year. Most have occurred since mid-August. Thirty-one people have died, and more than 9,200 buildings have been destroyed.

In Southern California, a brush fire Thursday near Redlands triggered a small evacuation as it grew to more than 100 acres (40 hectares). It was about 50% contained.

Collins said she received a message alerting her that her home would lose power Wednesday night and she dreaded having to throw away all her refrigerated food as in past outages. Fortunately, she hadn’t lost electricity as of Thursday.

Some people and businesses in Calistoga, including the hardware store, and in the small communities of Pope Valley and Angwin, were getting electricity from temporary generators brought in by PG&E. The utility better targeted outages this time after it was criticized in 2019 for cutting power to about 800,000 customers and leaving some 2 million people in the dark for days.

“For them to leave our power on is really awesome because we’ve all suffered so much in the last month,” Collins said.

“These are challenging times. Not only are we right in the peak of the wildfire season … many of us are working from home, schooling from home as well,” he said. “We recognize that hardships are introduced when we shut off power.”

Barbara Nemko, Napa County’s superintendent of schools, said the warnings of high winds and intense heat sent “a shiver down my spine.”

“After undergoing two major fires in the last two months it’s almost unthinkable that we are having to prepare yet again for the possibility,” Nemko said.

She said the district has been fortunate that no public schools burned this year. Still, the costs have piled up as schools had to throw out large quantities of spoiled food, buy pricey filters to address terrible air quality and ash in the air, and secure generators to deal with outages.

Numerous studies have linked bigger wildfires in America to climate change from the burning of coal, oil and gas. Scientists have said climate change has made California much drier, meaning trees and other plants are more flammable.

The weather prompted California’s electrical grid operator to issue a statewide Flex Alert urging people to conserve energy between 3 p.m. to 10 p.m. Thursday by turning down air conditioners and not using major appliances. Previous conservation efforts this summer were praised for reducing the power demand and avoiding rolling blackouts after an August outage caught many people off guard.

PG&E’s targeted power cuts beginning Wednesday were the third in less than two months aimed at preventing downed or fouled power lines and other equipment from sparking wildfires.

PG&E’s aging equipment has sparked several major fires in recent years, including a 2018 blaze that killed 85 people and destroyed much of the town of Paradise. The community was among those affected by the outages Wednesday, which led school officials to suspended all virtual classes.

The utility pleaded guilty in June to 84 felony counts of involuntary manslaughter – one death was ruled a suicide – and paid $25.5 billion in settlements to cover losses from that and other recent power line-sparked catastrophes.