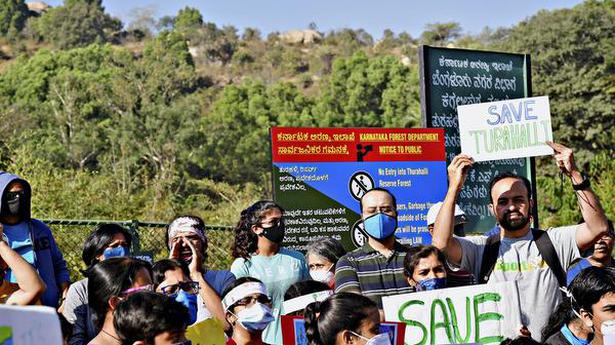 A campaign by awakened citizens has halted the work on turning Turahalli forest into a tree park, but the threat still persists. By M.A. Siraj

Turahalli forest, the focus of the city’s green activists, has been spared the fate of a tree park, thanks to the support ‘Save Turahalli’ movement gathered over a fortnight demanding that it be kept in its pristine natural form. But the threat still looms as it is part of the Vision 2022 Programme document announced by Chief Minister B.S. Yediyurappa. An on-the-spot announcement by Forest Minister Arvind Limbavali after inspection, in response to people’s resistance, has for the time being halted the work and bulldozers have been withdrawn.

Few perhaps know that Turahalli forest itself came up as a people’s movement. Decades ago it was mere scrubland with a few rocky outcrops facing the harsh sun in summers and rains thereafter. It was the residents of the area who began to plant saplings, took meticulous care of them and turned the area green and saw to it that nothing disturbed the serenity and tranquility of the place. It was at their behest that the Forest Department surveyed the area later and designated it as an urban forest and put up a board declaring it a ‘mini-forest’.

The locals had formed several groups to protect it from encroachment and prevent any activity which may disturb the flora and fauna. ‘Clean Up Turahalli’ used to mobilise volunteers to collect trash every fortnight. ‘Chiguru’, yet another NGO, would conduct guided tours for school students, making them aware of the natural process through which forests thrive, act as carbon sinks, conserve groundwater and encourage wildlife.

Two more civic organisations – ‘Save RR Nagar’ (part of Turahalli falls under Rajarajeshwari Nagar Assembly constituency) and ‘I-care’ – kept vigil against undesirable activities. All activities were conducted with the full knowledge of the Forest Department and with the help of forest guards.

According to Chaitanya Subrahmanya, an activist with the recent campaign demanding status quo, the COVID-19 lockdown came to it as a godsend as no forest fires were reported during the last summer unlike previous occasions.

Another activist, A. Bhanu (who works as Chief Technical Officer in the civil engineering department of the Indian Institute of Horticultural Research), says the 597-acre Turahalli forest has nearly 1.20 lakh trees, hosts 120 species of animals, 80 species of butterflies, and boasts of a population of 200 peacocks. Divyabai, 21, a degree student and resident of Nagegowdanapalya village on the fringes of the forest, says she has grown up feeding peacocks that visited the village every morning.

The lush greenery has prompted builders in the area to advertise their apartments with reference to the foliage the Turahalli forest offers them, says Shodhan Kumar of Mission Disha, which spearheaded the campaign recently. “All the vigil and watch could not save the entire area from encroachment. Even the BDA carved out some parcel of land to plan a layout. Some green activism and a PIL in the High Court in 2013 led the Forest Department to recover much of the encroached land which regained the forest characteristics due to active involvement of local residents in planting of saplings,” says Shodhan.

Though chain-linked fences were set up to demarcate the boundaries, the area was not fully protected against the machinations of anti-social elements, as was evident from the trash collected by green activists. In 2011, a 40-acre plot at the extreme end of the forest was turned into a tree park and inaugurated by the then Chief Minister Sadananda Gowda.