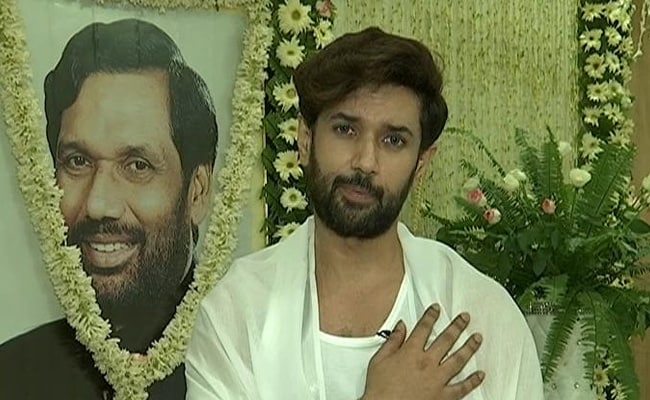 A day before voting starts for the Bihar election, a video of Chirag Paswan preparing to record a speech standing next to his father Ram Vilas Paswan’s photo has emerged online and his being shared on social media.

The video was taken when the Lok Janshakti Party (LJP) leader was filming a message on his party’s manifesto for the polls.

Chirag Paswan is in all-white clothes of mourning that he wore in the days after his father’s death on October 8.

With Ram Vilas Paswan’s garlanded portrait by his side, he is heard chatting with his team before the recording.

As the video went viral, Chirag Paswan blamed Bihar Chief Minister Nitish Kumar for the leak, “I don’t understand the purpose of this video? Do I have to give proof that I was sad about my father’s death? The level to which Nitish Kumar has stooped shows that he is worried,” he told ANI.

Reacting to the video, many mocked the 37-year-old actor-turned MP for his “performance”. Some attacked him for “cracking jokes” while in mourning.

I don’t know how many seats LJP will get in the upcoming elections but Bollywood has lost a brilliant actor.

“JDU leaders, fearing their defeat, have stooped to a new low. The video was shot to launch the party manifesto. Every day a video is being shot, so what is wrong with it? Nitish Kumar will get the people’s reply to this too. Nitish Kumar’s exit is certain,” tweeted Chirag Paswan’s party.

Chirag Paswan, a former member of the Nitish Kumar-led National Democratic Alliance (NDA), is contesting the polls separately, saying that while he remains loyal to Prime Minister Narendra Modi and the BJP, his mission is to see the Chief Minister’s exit.

Bihar will vote in three rounds till November 7. The results will be announced on November 10.