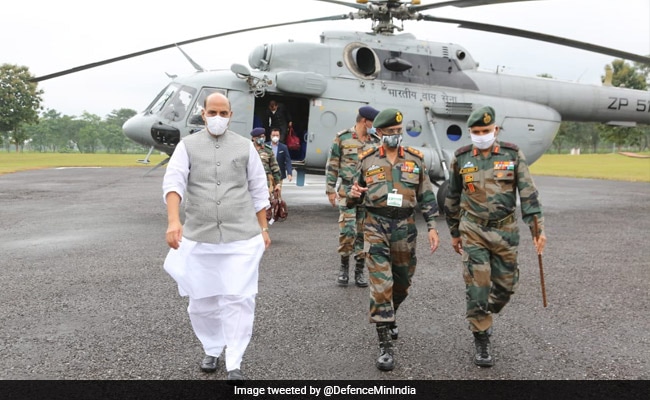 Defence Minister Rajnath Singh on Saturday reviewed the combat preparedness of the Indian Army at the Sukna-based headquarters of its 33 Corps which is responsible for guarding the Line of Actual Control (LAC) with China in the Sikkim sector, officials said.

The defence minister arrived at the key military base, popularly known as ”Trishakti” Corps, in Darjeeling district in late afternoon as part of his two-day visit to West Bengal and Sikkim to review the military preparedness in view of the border row with China in eastern Ladakh as well as to celebrate Dussehra with soldiers.

The Army has significantly bolstered deployment of troops and weaponry along the nearly 3,500 km-long LAC including in the Sikkim and Arunachal Pradesh sectors.

The officials said top commanders of the 33 Corps gave detailed briefing to the defence minister and Gen Naravane on the situation along the LAC in Sikkim sector as well as about deployment of troops and weapons.

In an interaction with a group of Army personnel, the defence minister conveyed his wishes to them on the occasion of Vijayadashami and hailed their dedication in securing the nation’s borders.

“Due to brave soldiers like you, the borders of this country are protected. The whole country is proud of you,” he said.

The defence minister also talked about the rich history of the Trishakti Corps.

“I extend my best wishes to all of you and your family for the festival of Vijayadashami,” the defence minister’s office tweeted quoting him as saying.

Officials said Singh will perform ”Shastra puja”(worship of weapons) at Sherathang area in Sikkim on Sunday morning on the occasion of Dussehra.

The defence minister had performed ‘Shastra Puja’ in the French port city of Bordeaux during Dussehra last year as he was on a bilateral visit to the country then.

Singh has been performing ‘Shastra Puja’ during Dussehra for the last several years including during his tenure as the Union Home Minister in the previous NDA government.

Almost all formations of the Indian Army along the LAC are on a very high-level of alert in view of the border row with China in eastern Ladakh.

India and China are locked in an over five-month-long bitter border standoff in eastern Ladakh that has significantly strained their ties.

Both sides held a series of diplomatic and military talks to resolve the row. However, no breakthrough has been achieved to end the standoff.