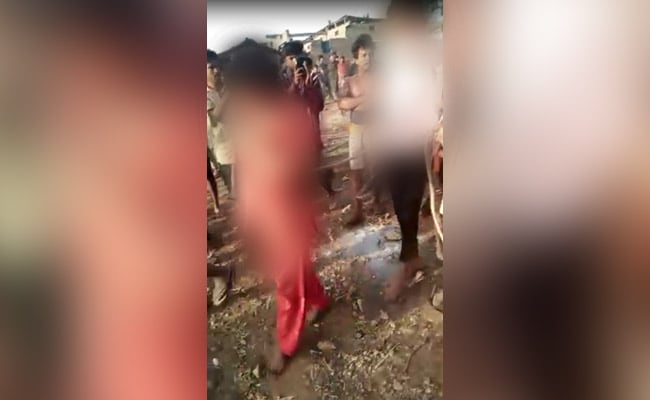 Cops came to the rescue of the 16-year-old girl when she was being paraded.

In an appalling incident that shows sheer insensitivity against sex assault survivors, a 16-year-old girl, who was allegedly raped in a tribal-dominated village in Madhya Pradesh, was seen being paraded with the accused on Sunday. A disturbing video shows them both tied with ropes as people around chant slogans. Six people, including the accused, have been arrested, police said, after the clip triggered shock and outrage.

The clip shows the young girl being paraded with the accused as some men walking around them chant- “Bharat Mata Ki Jai (Long Live Mother India)”. They were paraded after they were beaten up. The incident was reported from tribal-dominated Alirajpur district, about 400 km from state capital Bhopal.

Reports said the rape survivor’s family members were among those who forced her to walk with the accused to shame her.

Cops came to the rescue of the girl when she was being paraded. Police officer Dilip Singh Bilwal said two cases have been filed.

“One of the cases was filed against the 21-year-old man who is accused of rape. Another FIR (first information report) was filed against family members of the girl and villagers for parading her in the village and beating her,” he was quoted as saying by news agency PTI.

The case against the accused has been filed under Indian Penal Code (IPC) and under provisions of the Protection of Children from Sexual Offences (POCSO) Act.

In the case against family members of the survivors, sections 294 (Obscene act in public places), 355 (Assault or criminal force with intent to dishonour person), 323 (voluntarily causing hurt), 342 (wrongful confinement) and other sections of the IPC have been added, police said.