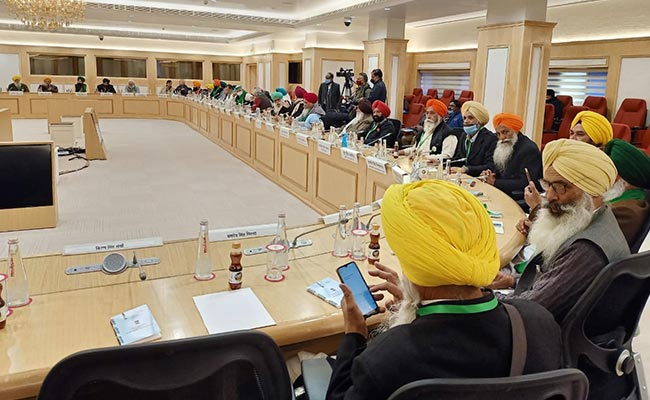 The farmers plan a tractor rally on January 26 if their demands are not met.

The eighth round of talks between the government and protesting farmers seems to have made little progress today in breaking the deadlock. Information seeping in during a break indicated that the Union ministers have said laws are meant for the entire nation and not only Punjab and Haryana. The opposite side, however, stuck to its demand saying let the states bring in their own legislation.

The three new agricultural laws, legislated in September 2020, have sparked a furore across the country in the past few months, with protesting farmers threatening to hold a tractor rally in the national capital on Republic Day if their demands are not met.

One farmer leader Sarvar Singh Pandhera told NDTV that the government is sticking to its claim that most farmers and their unions are backing the new laws.

“The government is adamant that it won’t repeal the laws….talks are stuck. It doesn’t look like there will be any results. It is possible that they will sweet talk us into further talks,” Pandher said.

The last meeting, on January 4, failed to break the stalemate. On Thursday, the farmers took out a tractor rally along the Delhi borders – a rehearsal for the main one planned for January 26 if the talks fail.

Today’s meeting between farmer unions and government representatives took place at Vigyan Bhavan in New Delhi a little after 2.30 pm.

Following the seventh round of talks, at least one farmer union involved in the parleys had asked the protesters to prepare for the long haul, since the government had clearly refused to consider the repeal of the laws. They also want a law that guarantees the minimum support price.

Since the seventh round, both sides seem to have toughened their respective stands. While farmers took out tractor rallies, Mr Tomar met Sanjay Nath Singh, the grandson of former PM Lal Bahadur Shastri, on Wednesday. Mr Singh, who supports the three new farm laws, told NDTV that the MSP system was launched by PM Shastri to protect the interests of Farmers. The contours of the agricultural economy, however, had changed today and farmers should be given the freedom to sell their produce, Mr Singh added.

Mr Tomar has also met a Sikh priest named Baba Lakha Singh of Ludhiana’s Nanaksar Gurudwara to mediate between the government and the farmers. The priest is associated with the Sant Samaj, which held influence during the Akali Dal-BJP government in Punjab. He was among the invitees for the Ayodhya Ram temple Bhoomi Pujan.

Baba Lakha Singh also belongs to the same sect as Baba Ram Singh, who killed himself last month amid the protest. He had extended support to the protest much before it had reached the Delhi border.

Thousands of farmers from Punjab, Haryana, Uttar Pradesh, and other states are camped in and around Delhi over the past many weeks in protest against the new farm laws.

The contentious laws are: Farmers’ Produce Trade and Commerce (Promotion and Facilitation) Act, 2020, the Farmers (Empowerment and Protection) Agreement on Price Assurance and Farm Services Act, 2020, and the Essential Commodities (Amendment) Act, 2020.

The protesters view these pieces of legislation as threatening their long-term financial position and bargaining power. The government, however, insists these will only free them more than ever to trade their produce in a wider market.

Over 60 farmer protesters have died till now, many because they could not survive the extreme weather conditions.

In December, the Supreme Court had ordered that a special committee be formed, insisting that the Centre’s negotiations have failed. “Your negotiation will again fail as they (the farmers) won’t agree,” said the bench led by Chief Justice of India Sharad Arvind Bobde.