A round-up of what’s been happening in India and around the world, from The Hindu Weekend desk

Charu Parashar and others

Let’s list the brave Indian designers who are launching stores during the pandemic. Arpita Mehta and Anita Dongre introduced new flagships during the festive month (in Mumbai and in Hyderabad’s Banjara Hills, respectively). And then there is Charu Parashar. Marking 15 years in the fashion industry, she opened her store in Mehrauli earlier this month. Niloufer, her festive edit, “draws inspiration from the last princesses of the Ottoman Empire”. However, the collection — which includes ethnic wear like shararas, lehengas and ruffle saris as well as jackets, kaftans and skirts — reflects a different story. We see geometric Aztec patterns and vintage florals, interspersed with resham mirror work and zari. On going ahead with the launch, Parashar says, “Downsizing the retail footprint was a step in dealing with the current economic upheaval, but I feel things have stabilised since October.” She adds that while the digital format can enhance reach and provide information, if one is talking bridalwear, “you need to visit a store”. For those who choose to disagree, the entire collection is also available on charuparashar.com, starting from ₹20,000.

This online platform (pronounced ‘i-spy’), founded by Aisha Saraf Kothari, showcases collections from European boutiques and designers. The curated list includes menswear, womenswear, jewellery and sunglasses from lesser-known labels. There’s also a fascinating collection of clutches and bags. Our picks: signature pieces from London-based L’alingi. Kothari writes that the brand “seamlessly intertwines mundane objects with luxurious relics, to transform the commonplace clutch into a capricious and humorous work of art”. In the Jasmina Emerald, for instance, the resin case with a marbled finish is topped off with a mother-of-pearl and gold ice-cream scooper. And instead of embellishing a bag with beads, designer Alia Zaki Ali has made a pearl-like sphere with quirky brass hardware. Priced at ₹70,397 and ₹37,839 respectively. Details: aispi.co 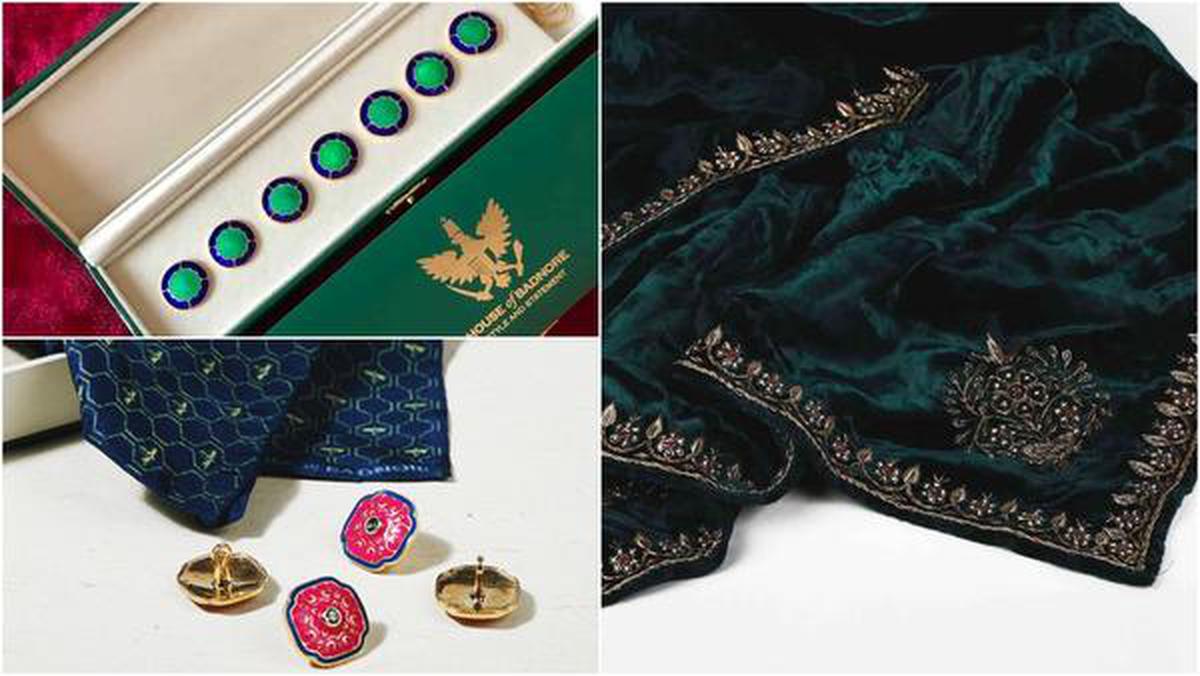 This heritage-driven brand is backed by the expertise of Archana Kumari Singh (from Pratapgarh in Avadh and married into the royal family of Badnore in Rajasthan). After working with Delhi-based silversmiths Frazer and Haws, and a stint as editor of Gems and Jewelry magazine, she has turned entrepreneur. Just in time for the gifting season, she has cuff links studded with precious stones, pashmina mufflers and printed silk pocket squares for men, and embroidered wraps and shawls in cashmere and velvet. Look for bracelets and buttons showcasing the traditional craft of Thewa from Rajasthan. The technique fuses 24K gold motifs on glass, which are then encased in a gold-coated silver frame. From ₹1,200 onwards. Details: houseofbadnore.com The fashion show has seen many alternatives during the pandemic, and the week-long #GucciFest is the latest. With this seven-part miniseries that includes film and fashion, the Italian luxury house announce their latest collection, a seasonless line — Ouverture of Something that Never Ended.

Creative director Alessandro Michele worked with American filmmaker Gus Van Sant on this production that was shot in Rome and that plays on their YouTube channel and other social media platforms. Featuring actor and performer Silvia Calderoni in the lead — she has been blurring gender lines all her life — the series takes viewers on her surreal daily routine in the city, as she encounters celebrities like Billie Eilish, Arlo Parks and Florence Welch. Another Gucci darling, Harry Styles, drops by in jorts and a T-shirt printed with ‘Gucci Loves Pink Eschatology 1921’ on the front and 25 on the back. 1921 is a reference to the year Gucci was founded. Each setting — at home, a café, the post office, the theatre — reveals more outfits from the collection. Meanwhile, there are also films from emerging brands on Gucci’s YouTube page. With one episode being released daily, the series comes to a close on November 22. Details: guccifest.com After his fun shirts for men with the theme Urban Jungle back in summer, Satya Paul’s new creative director Rajesh Pratap Singh presents Valley of Flowers. The ready-to-wear line includes reversible kimonos, tailored pant suits, pleated tunics and tie-up dresses, with the kimonos priced at ₹9,995. Their signature saris feature 3D embroidery, while the architectural leather handbags come in solid colours. There is a definite hippie vibe from the 60s and 70s in the floral patterns that make an appearance on all the garments. Details: satyapaul.com Prince Charles — yes, British royalty — enters the fashion world with a partnership between his charity, The Prince’s Foundation, and the Yoox Net-a-Porter Group. The 18-piece collection aims at highlighting the skills and craftsmanship of British and Italian artisans while using sustainable practices. The Modern Artisan luxury capsule is an 18-piece line featuring pieces like a cashmere bomber jacket, a pleated silk midi dress and merino culottes. Available on yoox.com and net-a-porter.com.