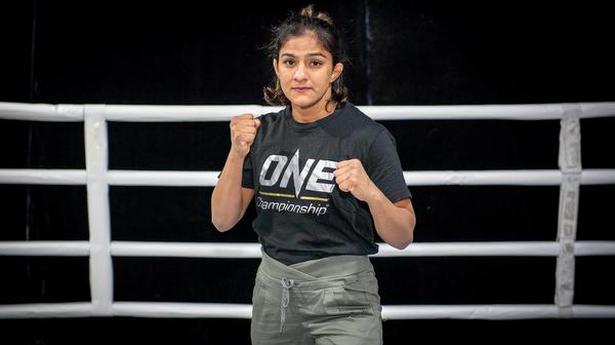 With two easy wins in as many bouts in her MMA career so far, Ritu Phogat will be looking to step up her game when she takes on Cambodian Nou Srey Pov on October 30 in Singapore.

The One: Inside the Matrix challenge would be the first for Ritu in eight months. And, while her wrestling pedigree has helped her so far, Ritu says she has been working on other aspects as well, including striking, something her opponent is an expert at.

“Wrestling has formed the bedrock of a lot of my efforts in MMA but I have been working on perfecting a lot of other techniques. Initially, I had a lot of trouble with striking and jujitsu, but I have improved,” Ritu said during a virtual interaction.

Unwilling to reveal further, she simply said her opponent was “an experienced MMA champion” and that it would be “an interesting fight” but added that Pov would be ‘shocked’ with her different strategy for the fight.

Admitting that combat sport in an empty stadium would be a challenge, Ritu insisted she was ready for the experience.

“No audience will definitely feel different as crowds can provide motivation. But when I step into the ring, my sole focus is my opponent. Besides, an empty stadium means you can hear your coach guiding you,” she reasoned.

“His (Khabib’s) control on the ground is immense, I hope to fight like him and watch his videos to learn more. Virat Kohli is also really inspiring, I like watching his training videos,” she said.