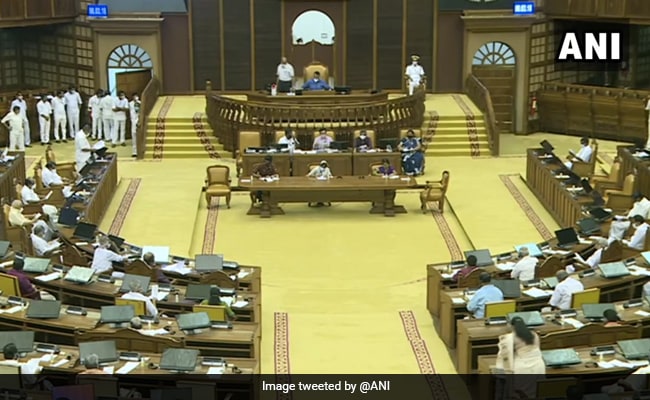 Even the lone dissenter, the BJP’s O Rajagopal, did not vote against the resolution.

The Kerala Legislative Assembly today unanimously passed a resolution seeking the withdrawal of all the three contentious agricultural laws enacted hurriedly by parliament in September. Raising the state’s fears over the effects of prolonged tumult in the country’s farm sector, the resolution said “Kerala could not bear the impact of such a situation”, particularly amid the ravaging COVID-19 pandemic. The new farm laws have sparked a furious bout of protests among farmers of Punjab, Haryana, Uttar Pradesh, and other states that is yet to abate.

“There should be a system where agricultural products are procured by the Central government and distributed to the needy at fair prices. Instead, it has allowed corporates to take over the trade in agricultural products. The Centre is shirking its responsibility of providing fair prices to farmers,” Mr Vijayan said, tabling the resolution in the House.

“If these protests continue, it will affect Kerala badly. If agriculture produce stops coming to a consumer state like Kerala, the state will be pushed towards hunger,” he said.

Farmers, the Chief Minister said, are worried about losing the current support price, which could leave them weakened bargaining power before the strength of corporate entities.

“Considering all this, the Kerala Legislative Assembly is requesting the Central government to cancel these three farm laws and accept the demands by farmers,” Mr Vijayan said, referring to their ongoing protest as “historic”.

Interestingly, a key contention of the protesting farmers, India’s long-standing Agricultural Produce Market Committee (APMC) system, which primarily aimed at ensuring farmers’ financial security, is not followed in Kerala. The state has an alternative system involving horticorp outlets and vegetable and fruit-promotion councils.

Yet, the resolution was passed by the House unanimously, with the BJP’s lone member, O Rajagopal, despite being the only dissenter, not objecting during the vote. “There are some people here who want to blame PM Modi for everything and anything,” Mr Rajagopal said while debating the move.

The Congress-led United Democratic Front opposition combine, backed the protesting farmers. “The Prime Minister speaks on TV and casts aspersions on farmers. He should have called the farmers and spoken to them. I salute our farmers,” said former state minister, KC Joseph of the Congress.

The opposition moved three minor amendments to the resolution today, of which one was accommodated by the government.

Today’s Kerala House resolution comes at the end of much drama between the Left-led state government and Governor Arif Mohammed Khan.

Governor Khan had earlier refused to call the special session on December 23 to discuss the contentious laws, saying Chief Minister Pinarayi Vijayan had not addressed the question raised by him on the nature of emergency warranting the brief session.

This unprecedented move was seen as being completely out of the gubernatorial purview, since, constitutionally, the governor is bound by the decisions taken by the council of ministers.

On December 24, the state cabinet sent another recommendation to convene the Assembly, and this time the hour-long special session received Mr Khan’s nod, even though the government had to issue some clarifications he had sought.