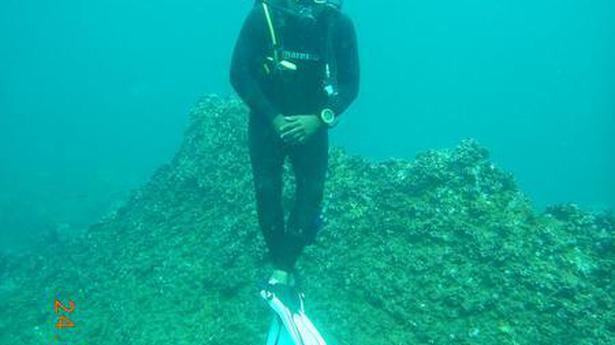 After a hiatus of nearly a year following the COVID-19 pandemic, the scuba divers of Visakhapatnam made a fascinating discovery when they plunged into the sea off Rushikonda Coast, last week.

A team of four scuba divers from Livein Adventures who were exploring dive sites chanced upon a rare rock formation in the shape of an arch about 30 feet below sea level near Rushikonda. According to Balaram Naidu, founder of Livein Adventures, accessibility makes the area appealing to scuba divers. “This is the first time I have seen such an arch in this part of the coast. There is good presence of underwater life surrounding the arch,” he says.

The natural arch is about one metre in height and one-and-a-half metre in width. The scuba divers say that a person can easily wade through it. The arch also makes for an excellent frame for wide-angle diver shots.

Located at a shallow depth, the site of the arch is easily accessible for even novice scuba divers and non-swimmers. “A 15-minute breathing practice in shallow waters is enough to take the dive at Rushikonda Coast to have a glimpse of this fascinating rock formation,” says Naidu. According to the scuba divers, the underwater natural arch is similar to the famous arch at Mangamaripeta beach, which geologists say dates back to the last Ice Age, around 10,000 years ago.

About three years ago, the team of Livein Adventures had made a rare discovery of a centuries-old shipwreck under the sea bed, near Visakhapatnam. The unearthing of the sunken vessel had opened up a world of wonders for the scuba diving community in India. Says Naidu, “The Visakhapatnam Coast can be one of the most intriguing diving destinations with every new diving site having the potential to throw up surprises.”