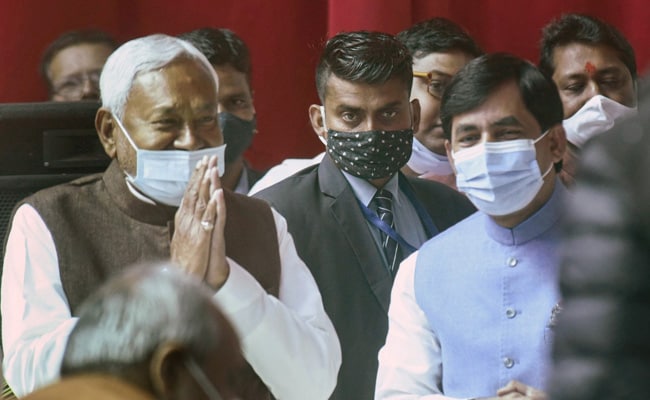 Former Union minister Shahnawaz Hussain was among the 17 ministers who took oath as Bihar Chief Minister Nitsh Kumar expanded his cabinet today. Mr Hussain was the first to be administered the oath of office by Governor Phagu Chauhan at a ceremony held at the Raj Bhavan for the much-awaited cabinet expansion.

Others who took oath today included JD(U) leaders Sanjay Kumar Jha, Shravan Kumar, Lesi Singh and Madan Sahni and Pramod Kumar of the BJP. All of them had held ministerial positions in the previous government.

The Bihar cabinet, which can have up to 36 members, had only 13, apart from the Chief Minister. The expansion had been hanging since last year’s assembly polls in the state over Mr Kumar’s disagreement with the BJP over the larger ally’s representation in the cabinet.

The BJP, which was the junior partner in the state, had taken the role of the big brother after its spectacular results in the election following the solo contest by Chirag Paswan’s Lok Janashakti Party. The LJP had cut into the votes of Nitish Kumar’s Janata Dal United, pushing it down from 71 seats to 43. It also gave the upper hand to the BJP, which won 74 seats. The JDU had squarely blamed the LJP for its poor performance.

On Sunday the state BJP chief Sanjay Jaiswal and deputy chief ministers Tarakishore Prasad and Renu Devi had met Mr Kumar to iron out the differences.