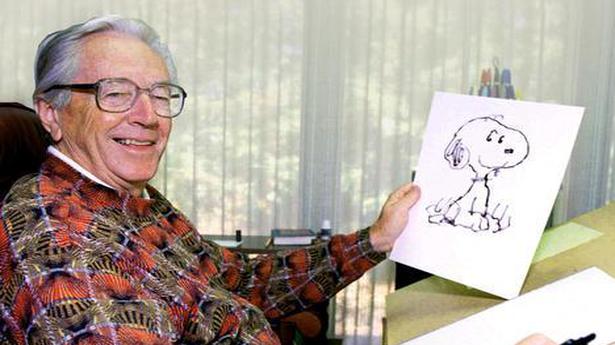 As Jean Schulz navigates the hallways of the Charles M Schulz Museum in Santa Rosa, California, she frequently runs into enthusiastic Peanuts fans who are eager to share how the comic series or books affected their lives or how a Snoopy plushie they held onto saw them from their childhood into their adult years.

“People have always found comfort in it,” she says. Even over a video call, Jean has a bright sparkle in her eye, as she lovingly speaks of her late husband Charles Monroe ‘Sparky’ Schulz, the creator of the Peanuts world. At 82, Jean is chatty and effervescent, her voice filled with adoration for every bit of her late husband’s legacy. On June 25, AppleTV+ is releasing a documentary Who Are You, Charlie Brown? detailing Charles’ journey to creating Peanuts. The first strip débuted on October 2, 1950.

The film bifurcates into two stories: one of Charles’ life, and the other following everyone’s favourite ‘lovable loser’ Charlie Brown tackling a school essay pegged on who he is. Audiences can look forward to archival clips of Charles’ voice recordings and interviews with industry greats such as Jean herself, journalist-presenter Al Roker, actor-producer Drew Barrymore and filmmaker Paul Feig. And, of course, the film is peppered with pieces of the nostalgic original music by jazz composer Vince Guaraldi. Jean says she is blown away by the spectrum of people touched by Charles’ work.

Before Who Are You, Charlie Brown? went into production, Apple TV had already released several Peanuts originals such as Snoopy in Space and The Snoopy Show – but executive producers Craig Schulz (Charles’ son), Ron Howard, Brian Grazer and director Michael Bonfiglio felt it was the right time to bring Charles’ story forward. Oscar-winning actor Lupita Nyong’o, a self-proclaimed Peanuts addict. Jean is not just the steward of Charles’ vast estate, she feels responsible for it all, right down to the wiggle of Snoopy’s tail. She praises Nyong’o, “I wondered when I heard the voice ‘who is this, she’s perfect!’ as I had no idea! She is just wonderful.”

The Peanuts characters, having not grown up for the past 50-plus years, are forever relatable – be it Charlie Brown’s enduring determination (particularly when it came to kicking a football), Linus’ eccentricity, Peppermint Patty’s go-get-’em attitude, Marcie’s sweetness, Lucy’s stubbornness or Snoopy’s constantly-fuelled imagination. Jean is proud of each of these characters for their part in Charles’ life and legacy. “Charles often said, ‘all those characters have a little bit of me in it and I have a little of them in me’, so through the documentary, you see his life and the characters blended in his world,” says Jean fondly.

In the film Jean reminds audiences how she first called Charles ‘my sweet baboo.’ Inspired, Charles would bring this endearment into the comics, and Sally Brown would call Linus the same for years. It is a memory and gesture she holds dear to this day.

One of the most loved characters is Franklin, an African-American boy Charlie Brown meets at the beach. Franklin, elbow-deep in beach sand, was introduced to the Peanuts world in 1968 when people of colour were shunned from society, and, at the time, this was considered daring.

Jean reflects on this decision, “He thought long and hard about doing that because he wanted to be sure anything he wrote was authentic. If you look carefully at the relationship between Franklin and Charlie, they meet not at school nor on the baseball diamond, but on the beach. Charlie Brown doesn’t go to the beach very often (laughs) but he did go there to meet Franklin, and I wish I had thought to ask Sparky why and how he came to that realisation. Looking at the comics now, I always thought, ‘he must have worked hard around how to bring Franklin in while keeping it authentic to the characters and yet, bringing out the messaging and stories from it’.”

In the documentary, Franklin’s début marked a huge deal for journalist Al Roker, it is his account in particular that left a mark on Jean. “Al became a friend over the years and they had a bond between them, as I do with Al. When he and Sparky first met in New York, Al told Sparky he wanted to be a cartoonist too. He showed Sparky some of his own cartoons. When Sparky was ill and decided to announce his retirement, he wanted Al to come to our home in Santa Rosa and tell him.”

What of Charles’ other work? Sometime in the mid-1950s, Charles developed a concept for a ‘workplace comedy’ strip featuring adults. He named the series ‘Hagemeyer’, after his close friend from his army days. The strip was proposed to the United Feature Syndicate as a new strip by Charles Schulz and was drawn on blank Peanuts frame templates from this era. In fact, all seven of these strips have never been seen together in person or publication, so a public exhibition was unveiled during the first week of June at the Charles M Schulz Museum. Inexorably, viewers will draw comparisons with Peanuts.

It may seem a far cry from the USA and the rest of the world we see today, though Jean points out, “Peanuts discusses the human condition so that is not going to change, people may express it differently. Now I find I have to switch my brain and catch up with how people are expressing their angst and needs (especially with social media), but I think it’s all the same. But it’s not different – we have the same sorts of frustrations as there were 50 or 60 years ago. It’s interesting that my husband captured something that still resonates today.”

Who Are You, Charlie Brown? is clearly Hollywood’s love letter to Schulz. One clip that will touch anyone watching it is one of Schulz’s last television interviews before his passing in 2000, during which he says tearfully but with a huge smile, “And Charlie still never got to kick that football!”