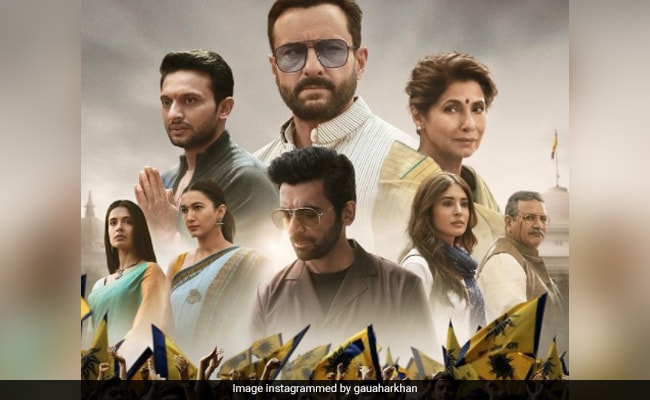 The cast and crew of Amazon Prime Video’s ‘Tandav’ – against whom police complaints have been filed alleging that some scenes had “insulted Hindu gods and goddesses” – issued an “unconditional” apology Monday evening, saying they did not intend to offend religious beliefs or sentiments.

They also referred to parts of a disclaimer that is an industry standard and said ‘Tandav’ was a “work of fiction” and that “any resemblance to acts and persons and events is purely coincidental”.

“‘Tandav’ is a work of fiction and any resemblance to acts and persons and events is purely coincidental. The cast and crew did not have any intention to offend the sentiments of any individual, caste, community, race, religion or religious beliefs or insult or outrage any institution, political party or person, living or dead,” their statement said.

“The cast and crew of ‘Tandav’ take cognizance of the concerns expressed by the people and unconditionally apologize if it has unintentionally hurt anybody’s sentiments,” it added.

The apology comes after the I&B Ministry sought a response from Amazon Prime.

“… today during a discussion, the Ministry of Information and Broadcasting informed (of) a large number of grievances and petitions… serious concerns and apprehensions regarding its content hurting the sentiments of the people,” the ‘Tandav’ makers’ statement began.

A complaint filed Monday morning by an Uttar Pradesh policeman said that 17 minutes into the first episode, “people dressed up in a very bad manner to represent Hindu gods and goddesses… shown to speak in a very uncalled for language… that hurts religious sentiments”.

In the same episode there are “conversations that lead to caste conflict…” the complaint added, alleging that other scenes disrespected the office of the Prime Minister and insulted women.

BJP leaders – including Maharashtra MLA Ram Kadam and Kapil Mishra, who is accused of making incendiary speeches that triggered last year’s Delhi violence – and numerous Twitter users have also hit out at the series.

A key aide of UP Chief Minister Yogi Adityanath warned those named in complaints to “be prepared to pay the price” and referred to police vehicles – a remark widely seen as alluding to gangster Vikas Dubey, who was killed in a controversial encounter with UP Police last year.

Madhya Pradesh Chief Minister Shivraj Singh Chouhan, in whose state a FIR was filed against Netflix for similar reasons, said: “Nobody has the right to disrespect our gods and goddesses… need to keep a strict eye on OTT platforms as they are showing vulgar content.”

The protests have also led to a political row, with opposition parties lining up to criticise the BJP. The JDU (the BJP’s Bihar ally) and the Samajwadi Party (in the opposition in UP) have spoken out.

The JDU’s KC Tyagi said politicians could not decide film content and pointed out that superstar Amitabh Bachchan – a known supporter of the BJP – had challenged Shiva in his films.

Samajwadi Party chief Akhilesh Yadav, meanwhile, accused the BJP of acting out a “tandav (Shiva’s dance of destruction) on ‘Tandav'” to deflect attention from the farmers’ protest. “Farmers are being dubbed terrorists and the NIA is summoning them. What is all this?” he asked.