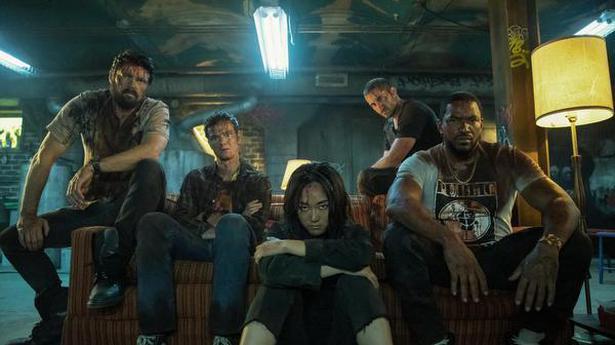 One thing that the actors felt strongly about? The show’s villains. Talking about Homelander, the sociopathic leader of The Seven (played by Antony Starr), Erin says, “I just think about him and it makes me so angry.” Shantel agrees, “I would probably want Becca to have whatever power it is that could incinerate Homelander in one second.”

Aya, meanwhile, has this to say about Stormfront. “I just want to say she is despicable and disgusting.”

Both seasons have highlighted several real-world issues. In Season 2, with Stormfront, there are parallels with the increased visibility of white supremacist groups in America. Was that a factor in your decision to take the role and did you have any apprehensions because of that?

Aya Cash: Yes, to both. I was aware of the complications of the role, and what it was going to be shining a light on. I was apprehensive because there were no scripts, and so there was nothing for me to say, ‘This is the way it is being done and handled and I agree with that’. I met with Eric Kripke when I was auditioning, to talk about what the role was and what he was going to be doing with it, and I was able to watch three episodes of the show to get the tone of it. I had a lot of trust in Eric because of the way that he talked about it and the real-life people that he was pointing to when crafting Stormfront. I felt like it was an interesting, important story. That is all you can do when you accept a job; take that leap of faith because it is hard to make something good. I was excited by the possibility and hopefully, we have pulled it off.

As Starlight mentions, there are similarities between Billy Butcher (Karl Urban) and Homelander. However, one big difference is that not only has Butcher experienced love, he has also given love. In that context, can you elaborate on the relationship between Becca and Butcher?

Shantel VanSanten: Sure. That is a story that I am so grateful to be a part of and to tell. Karl is an incredible actor. From day one, he made it feel like such a safe environment to create and figure out who Becca and Billy used to be together. I wish we got a few more glimpses of that because the Becca that we meet in Season 2 who has lived in a bubble for 10 years isn’t authentically who she is. It is basically a character of herself that she plays for a much bigger reason. There is a darkness to Becca that we don’t get to explore as much. There are reasons that they connected and it was really important in episode four [of Season 2] for us to try to dive into a bit of their history and to allow you to see that they truly are soulmates. They can’t be together and make it work because of circumstances. That part of it was really hard for me: that Becca sacrificed everything and ultimately, she doesn’t get everything to be happy. She has to keep making choices that are better for everyone else.

A major theme in the show is nature versus nurture. In this universe, how important is the parent, particularly the mother’s role, in raising a child?

Shantel: As it was described to me, it is the reason that Homelander turned out the way he did. He didn’t have the mothering and the nurturing. He had people who are corrupt raising him for their own purposes rather than out of unconditional love. I think that Becca understands that and that is why she has made the sacrifices she has. There is redemption for her in being able to raise a child out of a rape, who could be hope for the world. Her task in life and in this season is to give the child nurturing, love, empathy and understanding of human emotions.

Season 2 ends with Starlight and Queen Maeve with the upper hand against Homelander. How is this going to change the dynamic between the two?

Erin Moriarty: I think there’s an inevitable partnership to be formed and solidified. There has been a resistance from Queen Maeve and it is partially because she’s going through her own battle and is in her own world and rightfully so. I am going through my own battle and so the partnership is not as present this season. However, there is always an underlying presence that Queen Maeve has in Starlight’s life as a support system. I think that she proves time and time again that when Starlight needs her, she’ll step up even if it means defying someone like Homelander. I think it is because Queen Maeve and Starlight are the only females in The Seven until Stormfront joins. Obviously, Stormfront’s position in The Seven becomes compromised in Season 2.

We see it a lot at the end of Season 1 too. How Queen Maeve says to Starlight, ‘Don’t be like me, don’t become like me because I see you going down that road. Let me be the cautionary tale’. I can see the partnership solidifying as time goes on and I could see their necessity to band together as women who are working for this corporation that is out to objectify them.

Ashley and her team are the ones who shape public perception of the superheroes. This has real world parallels as well. What are your thoughts on how celebrities are presented to the public and what the public should keep in mind when following said celebrities?

Colby Minifie: I think that is something the show does well. It shows how corporations and people that have money to spend on changing the narrative can get away with murder. That is a part of The Boys storyline that I am happy to be a part of because it helps me become more aware of how a corporation can say, ‘We believe in this’, and [then] they don’t enact a lot of what they say. Then it becomes a capitalistic opportunity and it can also be a lie.

A deep dive into cyanotype printing