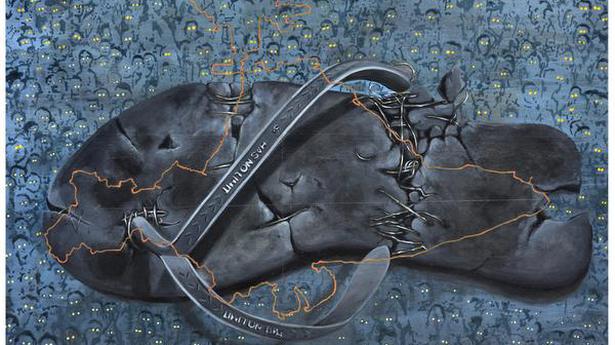 The online exhibition, which concluded on October 10, created a unifying architecture with the Constitution as its keystone to address manifold inequalities

Inked into a confined space, the inmates are restless. One seems to be on the verge of trying to pace about; another, sharp-featured and masked, sits cross-legged and glares at the artist. Others loom in the background — are those shadows on the wall or men crumbling into bones, with cracked skulls and skull-textured masks? And yet, all these are distinct figures still, human beings full of individuality and nervous energy. This is no longer the case when we pass on to the second half of Umesh Singh’s remarkable diptych, Escapade — a Journey with the Migrants. By this time they’ve dissolved into an undifferentiated mass of huddled humanity. The walls have narrowed, and shadows lean against them with an air of desperation.

Singh, who endured an arduous two months of isolation in Varanasi during the lockdown, and was then stuffed into a series of crowded buses to return to Bihar, decided to document the experiences of his fellow travellers, a group of migrant labourers and poor students, through his art. “The bus had only 30 seats, but there were 50 people. There would be two-three people under one blanket,” he recalls. The claustrophobia and eventual dehumanisation — dehumanisation in the eyes of, and by, an indifferent state — in stark black ink evoke thoughts of the infamous Black Hole incident of Calcutta or Chittaprosad’s depictions of the Bengal Famine.

Umesh Singh’s ‘Escapade — a Journey with the Migrants’

‘Spontaneous solidarities’, as epitomised in Singh’s works, was one of the thematic clusters of the exhibition ‘Broken Foot — Unfolding Inequalities,’ which ran online for three months before concluding on October 10. Driven by a need to respond to the unfolding migrant labour crisis, when an estimated one crore people tried to reach home on foot between March and June, curators Prabhakar Kamble and Rumi Samadhan reached out to 60 artists and built a thematic framework with labour at its heart. The works went up for sale on the Mojarto platform with proceeds going to artists in need.

The curatorial vision was developed along a number of interrelated contours, including the Constitution, with its idea of ‘we, the people’ and the various promises of equality; the contributions of B.R. Ambedkar to the labour movement; labour and urbanisation; migration; forms of labour; the plight of farmers; the relation between land, people and ecological issues, which ties in with tribal people and their traditions; and the notion of education as emancipation.

The eponymous work, Broken Foot, a sculpture in wood by curator Kamble, can be compared with Balaji Ponna’s painting, Walking Under the Empty Sky, in which a cracked slipper bestrides the outline of India as innumerable souls with glowing eyes stare accusingly. Both point to the rupture caused by the great migration, a tear in the social fabric born of blindness and betrayal. One of the exhibition’s major themes was the relationship between labour and the nation, and as we too often forget, a nation is nothing but an abstraction of a people. It is the nation that has been ruptured.

Photojournalist T. Narayan captured these lockdown journeys in his own way. One striking image, taken from behind, shows a child almost fused to his father’s neck and shoulders, as if they are one entity. Venkat Shyam’s painting, The Journey, similarly depicts a mother, looking almost like an Egyptian goddess with a pot for a crown, taking her son by the hand and walking barefoot, even as a train and an aeroplane cruise past. It’s hard not to think of the very different treatments the government meted out to returning NRIs and home-bound labourers.

An Ambedkarite gaze on society is prominent in many of the works, and perhaps its baldest expression is in Vikrant Bhise’s painting, Ambedkar and a Labourer. A worker cleaning a statue of Ambedkar covers the latter’s eyes — perhaps urging him not to gaze, shielding him from egregious reality. Arun Vijai Mathavan’s photographs of Dalit sanitation workers and mortuary technicians during the lockdown, and the extreme conditions and prejudice they face — heightened at a time of enforced social isolation — are also striking.

Gopal Gangawane’s painting Thinker is indeed Rodin’s Thinker, but sitting on a glass-cube pedestal, he towers above three emaciated children gazing longingly at a roti hanging inside the cube. Does his philosophical, perhaps sympathetic, gaze help them in any way? Will they ever be able to think abstractly if all they can afford to think about is their next meal? Another familiar image — the pietà, Mary cradling the body of Christ — is repurposed in the ink painting, Mothers Arms are More Comfortable, by Khandakar Ohida. A body with red flesh, blood and burns, held in a woman’s arms reminds us of the quotidian violence faced by the subaltern.

Intersectionality was at play everywhere, as the exhibition looked at inequalities in different dimensions. Siddhi Jadhav’s photographs offered a peek into the life of a hijra, while Tejaswini Sonawane’s etching, Arriving Home, depicted, grotesquely, the contradictions between modernity and tradition as a grimacing woman-owl, striving to take flight, remains grounded under the gaze of society’s beady eyes.

Such thematic expansiveness meant that Broken Foot wasn’t purely focused on the plight of migrant labourers, but created an unifying architecture that took the Constitution as its keystone. Its invocation of fundamental rights and the now-totemic preamble took one back to the anti-CAA protests while the work of artists like Randeep Maddoke and Kuldip Karegaonkar depicting the lives and deaths of farmers was uncannily timely. The documentary value of recording through art the tragedy of migrant workers during the lockdown, one of the greatest yet most muted crises in our recent history, is this project’s most important achievement.