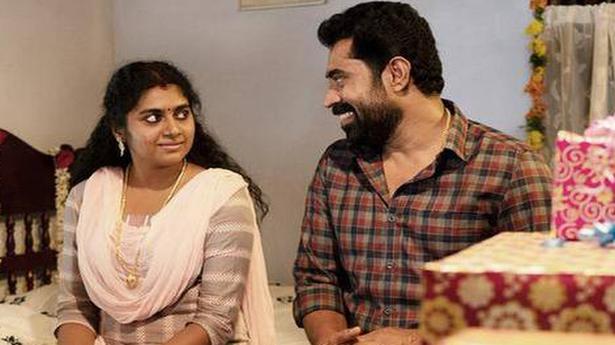 Actors Nimisha Sajayan and Suraj Venjaramoodu are excellent in this hard-hitting take on the sheer drudgery of everyday life, that many women go through

A leaking sink, uncomfortable close-up shots of leftover food, repeated shots of vegetables being cut, the smoke and fire of rice being cooked in a hearth, the clanging of the dishes being washed and a drab, unremarkable kitchen which almost becomes solitary confinement for the female protagonist. These are the images that fill the screen for much of the run time in Jeo Baby’s The Great Indian Kitchen, streaming now on Neestream.

It is clearly a conscious choice, for the intention here is not to please, but to disturb, to raise questions and to make the proud practitioners of patriarchy squirm in their seats. As if to convey that this is a story which represents many, the characters have no names. The film begins from a typical ‘pennu kanal’ scene, where an awkward conversation later, two strangers (Nimisha Sajayan and Suraj Venjaramoodu) get married.

From this point on, the woman, as well as the viewer, are confined to the kitchen mostly. She warms up to it initially, but the suger-coated imposing of more work by the father-in-law and the husband, who are averse to moving their muscles (other than for yoga), slowly gets to her. The father-in-law especially is a relic, who shuns all mechanical devices and prefers that she cooks the rice in a hearth and advises her against using the mixer, grinder or the washing machine. While in mainstream movies of the past, this work was glorified as something that completes the woman, here the movie places it as something being imposed on her.

A remarkable thing here is that both the men are not portrayed as angry or violent characters, but as soft-spoken ones who calmly impose their will on the woman, like slow, sweet poison. Case in point: how the father-in-law asks her not to take up a job at a dance school. This portrayal is potent, because it makes these characters more identifiable with a lot of people around us. In a breathtaking scene, Suraj displays controlled anger when asked about the difference in his table manners inside and outside the home. In the next scene, Nimisha is again lovingly forced to apologise against her will, just like how she involuntarily participates in sexual acts with him.

The script also takes head-on the regressive notions of impurity associated with menstruation, and places it firmly in the context of the Supreme Court verdict on women’s entry into Sabarimala. It does not shy away from taking a stand here. All through the film, one senses the rage that is welling up inside Nimisha, about to burst open. It does — and how — in two separate scenes part of the climax, that can be hard to take for some.

The repeated scenes set in the kitchen seem to be calculated, to tire out the viewer and give at least a sense of the sheer drudgery that many women go through. Through that, the film clinically strips away the greatness thrust upon this work by those who want to shirk it.

The Great Indian Kitchen is currently streaming on Neestream

Arya interview: ‘Marriage was the most beautiful thing that happened to me’