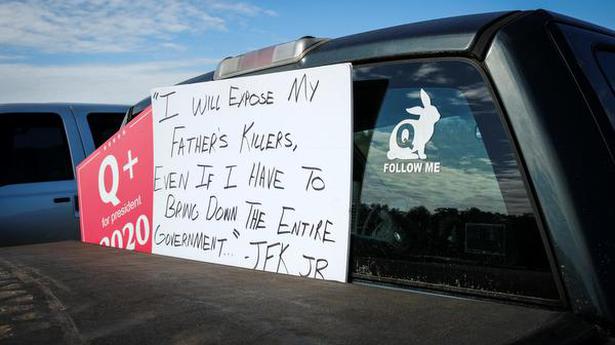 QAnon is an elaborate right-wing conspiracy theory that claims thousands of “deep state operatives” are involved in the racket, for which they will be arrested and punished in an event believers call “The Storm.”

In a recent televised townhall, U.S. President Donald Trump was asked if he denounced the right-wing conspiracy theory QAnon, which claims that Democrats are part of a satan-worshipping pedophile ring, and that Mr. Trump is the “savior” from this. He refused to do that, and instead praised the conspiracy theorists’s fight against pedophilia.

Experts who research extremist groups and political violence have said that Mr. Trump’s statement, the latest of many on a similar vein, is likely to legitimise QAnon supporters and encourage the spread of the convoluted conspiracy theory that is starting to spill out of the online space.

QAnon is an elaborate right-wing conspiracy theory that believes a wide range of people – Democratic party leaders, Hollywood elites, U.S. state government employees – to be a part of a global satan-worshipping, child sex trafficking group. It claims that thousands of “deep state operatives” are involved in the racket, for which they will be arrested and punished in an event believers call “The Storm.” Frequently mentioned names include 2016 U.S. presidential candidate Hillary Clinton, former President Barack Obama, and billionaire George Soros, among others.

QAnon is a relatively new conspiracy. It can be traced to an anonymous post on imageboard website 4chan in October 2017. A user who went by the name ‘Q’ posted a series of cryptic messages “exposing” the establishment, suggesting that an apocalyptic shake-up is in order against the Democrats. The posts, peppered with white nationalist slogans and pro-Trump messaging, found a dedicated audience. The user was assumed to be a high-level intelligence official with Q-level clearance, which is required to access Top Secret information in the U.S. government.

The clues or “crumbs” are unsubstantiated and does not stand up to scrutiny. However, on one instance, Q posted that Mr. Trump would tweet a phrase minutes before the President did, which followers took as an confirmation of Q’s legitimacy. Within months, it was picked up by conservative YouTubers and mediapersons, expanding its reach across social media platforms.

Does anyone take this seriously?

Many do. The malleable nature of the claims have led to it developing many offshoots with numerous, often contradictory, conclusions. It has trickled down from conspiracy theorists to YouTubers and Instagram influencers – an article in The Atlantic notes that many followers are drawn in by concerns around the child trafficking racket, a ‘safe’, non-partisan issue, and end up as conduits for the perpetuation of the conspiracy theory.

Social media giants like Facebook, Twitter and YouTube have pledged to place curbs on promoting QAnon content recently. Facebook said that it will remove pages, groups and Instagram accounts representing the theory. Instagram also placed restrictions that limit visibility of posts tagged with QAnon-related hashtags. Twitter said that it will be taking off nearly 7,000 QAnon accounts, and announced intention to stop promoting related content. YouTube too has announced stricter enforcement of policies to limit the spread of conspiracy theories, and said it has removed numerous QAnon-videos and channels under its existing policies.

However, the shape-shifting nature of conspiracy theories has posed a unique challenge. As misinformation surged and Facebook escalated the crackdown on related content, the company said that some groups have been using coded language to work around this, for example referring to Q as “cue”. They also integrate themselves into groups working on child safety or anti-trafficking. “QAnon messaging changes very quickly and we see networks of supporters build an audience with one message and then quickly pivot to another,” Facebook said in a blogpost.

The FBI, in 2019, classed QAnon as a potential source of domestic terrorism. The group has been linked to acts of real-world violence, including alleged kidnapping attempts, and the killing of a member of the Gambino crime family in the United States.

Group members have also been flagged for sharing content that celebrates violence, promotes anti-semitism, and spreading false information about U.S. voting, COVID-19, and the West Coast wildfires. It has also found takers in countries other than the U.S., including Germany and parts of Europe.

In a report, media watchdog Media Matters for America reported that President Trump has amplified Twitter accounts promoting QAnon at least 258 times as of October 15. QAnon supporters have been a visible part of Trump rallies in the past few months. The President, meanwhile, has repeatedly refused to denounce the conspiracy theory, saying “I don’t know that [it is false] and neither do you.”

QAnon has found some takers in the Republican party as well. While Vice President Mike Pence has dismissed the theory, over 80 congressional candidates have “endorsed or given credence to conspiracy theory or promoted QAnon content,” according to Media Matters for America. Of this, at least one candidate – Marjorie Taylor Greene of Georgia, who has expressed support for QAnon – is likely to be elected to U.S. Congress.