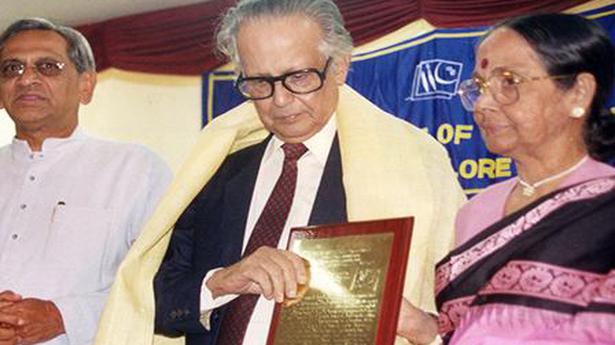 The cartoonist, illustrator and humourist, RK Laxman used to draw on the floors, walls and doors of his house as a child. The appreciation he recieved from his teacher of the drawing of a peepal leaf, proved to be the start of a long and illustrious career. Laxman’s centenary year is being celebrated this month.

Rasipuram Krishnaswami Laxman (1921-2015), or Doodu as he was affectionately called, was born on October 24 at Mysuru to a school headmaster. He was the youngest of seven siblings, one of whom was novelist, RK Narayan.

The Indian Institute of Cartoonists (IIC), Bengaluru, is celebrating Laxman by uploading a selection of his cartoons every day on its social media handles.

“As a student of Maharaja’s College in Mysuru, Laxman contributed to Koravanji, a Kannada monthly satirical magazine, brought out by writer and humorist Dr Ra Shivaram,” says VG Narendra, cartoonist and the brain behind IIC. “We are displaying these original cartoons.”

Apart from this, there will also be samples of Laxman’s work for RK Narayan’s novels —Malgudi Days, Swamy and Friends, Tenali Raman and The Man-Eater of Malgudi. “Laxman drew sketches for Wagle Ki Duniya, the show based on his Common Man, as well as for the book, Life in Kolkata, and one on Madhya Pradesh. He has also drawn for four books on management, and our online display will have some examples from all of these.”

Laxman’s unique take on political and social events was unmatched, says Narendra. “Ritu Gairola Khanduri, assistant professor of Cultural Anthropology at the University of Texas, who has studied Laxman, has rightly called him the cartoonist exemplary from India. GS Krishnan, who researched the cartoons, has called the period of Laxman, The Golden era of Indian cartooning.”

Narendra used to visit Laxman in Pune. “He appreciated my initiative of establishing the IIC. Laxman’s daughter-in-law, Usha, has been part of several of our exhibitions.”

Five years ago when the IIC displayed 97 doodles from Laxman’s scrapbook, the response was unprecedented. The event was part of a tribute to Laxman’s 95th birth anniversary. Narendra had discovered the book of doodles when he had met Laxman’s nephew, RS Krishnaswamy. “Krishnaswamy casually mentioned Laxman’s doodles lying about at home. I snapped them up. The scrapbook had nearly a 100 doodles that we restored for posterity.”

Laxman was known to doodle on scraps of paper. “My father gave my uncle a scrapbook in 1975 thinking this would be the best way to gather all his drawings in a single book,” recalls Krishnaswamy. “My uncle was curious about how people discussed political and day-to-day matters. Doodu uncle’s doodles were the result of 20 years of casual, wandering thoughts from 1975 to 1995 in the by-lanes of Mysuru.”

“The doodle, The Odds Are Against Us, came about on a road trip,” Krishnaswamy recalls. “When I drove Doodu uncle from Mysore to Bengaluru, a herd of aadu (goats) on the road made me honk insistently. The result was the doodle.”

The selection of works can be viewed until October 24 at: