Eindhoven in the Netherlands is seeing a surge in visitors, albeit virtually. The 19th Dutch Design Week has kicked off and people are logging on to check out over 500 exhibits in 3D viewing rooms. Think light installations with discarded lenses, living coffins (with mycelium) and textiles woven by drones.

But it is an exhibit at the Dutch Invertuals Gallery’s True Matter show that we are interested in. Equal parts eye-catching and confusing, the Mootu Lounger by Chennai-based design firm, The Architecture Story, is shaped like a ‘U’ and strung with moulded leather pieces. Is it furniture or art? Can one sit on it? Turns out, designers and partners Justine De Penning and Deepak Jawahar welcome such questions. “We wanted to take design as an opportunity for divergent thinking,” says Jawahar, 35. “The point was to think of different ways that a body can interact with an object, and the lounger plays with perception and interaction.”

And, though you may not see it immediately, the conceptual design has its origin story in the mridangam, the main percussion instrument in a Carnatic music ensemble.

Justine De Penning and Deepak Jawahar of The Architecture Story

A few months ago, Invertuals had challenged 22 young designers from 17 countries to work with raw materials from their local context, and to play with techniques, craftsmanship and traditions. “We thought it would be interesting to explore music and design — not in a direct way, but through the tectonics [method of bringing things together] of music creation,” says De Penning, 33, while her husband Jawahar adds, “During our research, we found that [Indian physicist and Nobel Prize winner] CV Raman’s light scattering experiments were inspired by Indian percussion instruments. So we wondered, could it lend itself to design as well?”

While debating how to break away from regular modes of understanding form, the duo decided to look at the mridangam. Something that was representative of ‘place’, of Tamil Nadu. “We visited mridangam makers in Mylapore [an area synonymous with Carnatic music] and different parts of Chennai, and learned that the mootu [the moulded leather that covers the two mouths of the instrument] is used for three to four years and then discarded. So it is a generational craft that doesn’t have an afterlife,” explains Jawahar. They took home a number of mootus to experiment with — deconstructing it, immersing it in water, shaping it with another object. “For the final piece, we used the techniques and tectonics of the mridangam to create the story we wanted,” he says. 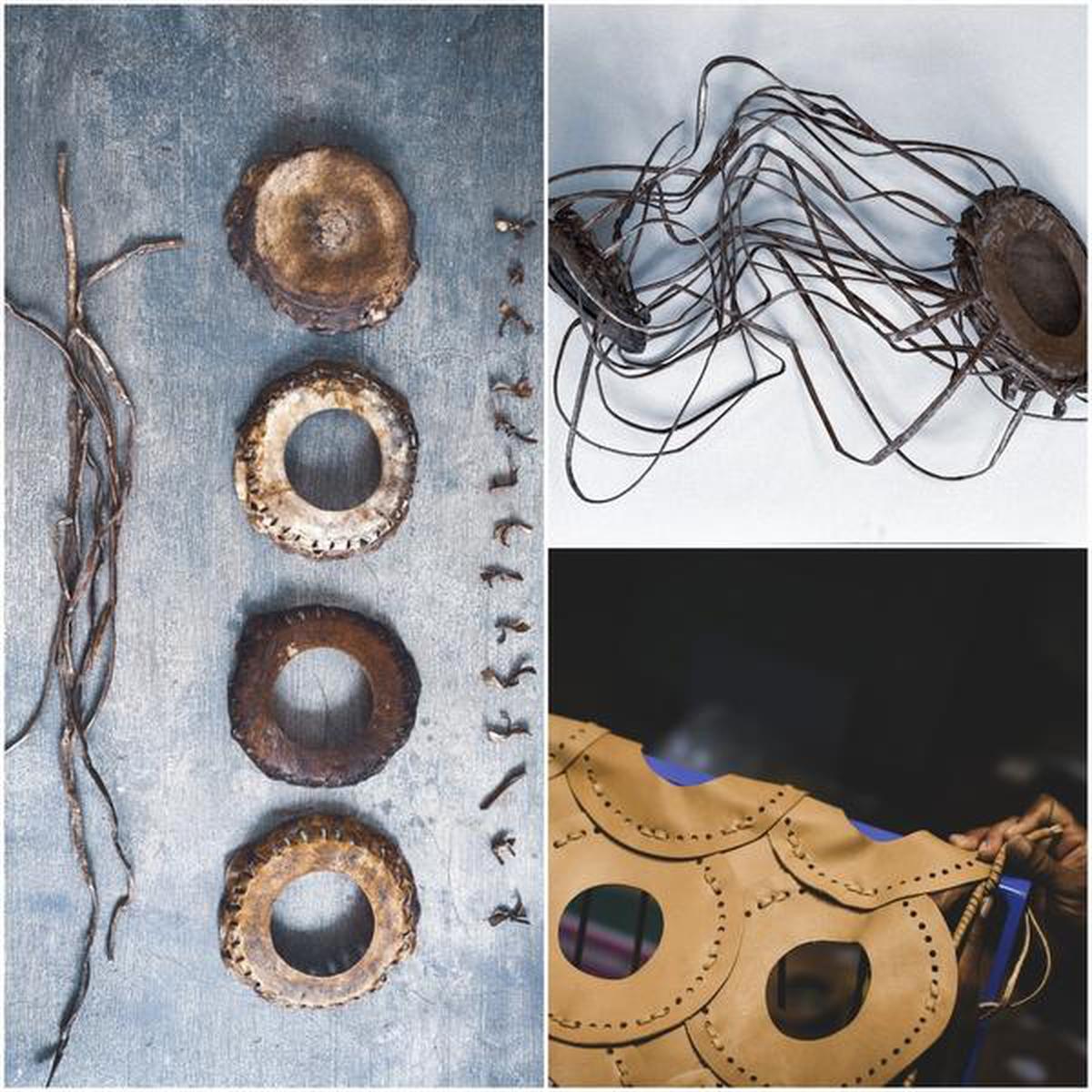 Making of the Mootu Lounger

This meant working with mridangam makers, hand-cutting 14×4 circular leather pieces, puncturing 48 holes around the circumference (the size of the circles and the number and position of the holes are derived from the mridangam mootu) and knotting them with leather ropes.

“When designing the framework, we did look at bringing in sound. The shape of the ‘U’, if filled with sound, allows for a certain movement,” De Penning tells me. But the desire to create a minimal translation had them deciding not to confuse the architectural framework with a sonic element.

The third piece of furniture from the three-year-old firm — the earlier two include a table made from marble, granite and metal, and a metal origami chair — the piece will not be mass produced, but they are open to commissions. As for the artisans, early suspicions about whether the duo was working on a new musical instrument have since turned into enthusiasm for more such experiments. “It was exhilarating,” Jawahar says. “Through August and September, in the mornings we would have these intellectual discussions on design with the gallerists and designers and [later in the day] go to Mylapore to collect the mootu and talk with the artisans. As designers, we were at the intersection of these two worlds. It pushed us to re-look TEK [traditional ecological knowledge] and the parallel worlds we are living in.”

The Dutch Design Week is on till October 25. Details: ddw.nl, tas.design