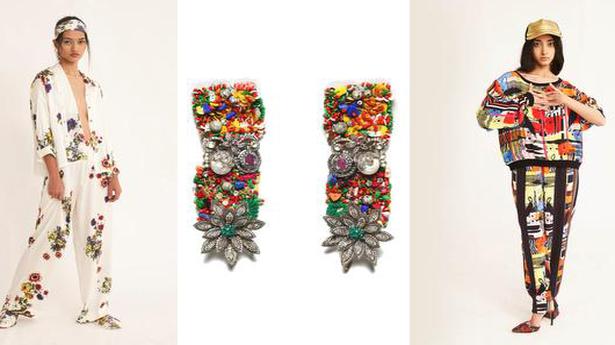 A couple of years ago, when Anamika Khanna was unwell and separated from her twin sons, Viraj and Vishesh, who were then studying at the University of Southern California, they developed a code to let each other know that everything was alright. Drawing from NASA’s “A-OK”, the boys made it their own love language by adding their mother’s initials, resulting in AK-OK. This touching narrative also lends its name to a new pret/RTW brand from the Kolkata-based designer’s eponymous label.

The first collection in 2019 included a line of lehengas designed by Anamika (including a pink one sported by Sonam Kapoor that drew some controversy on Diet Sabya). However, keeping in mind the changing needs of customers in a post-pandemic world, they have now shifted focus to athleisure and an e-commerce only approach. The website was launched early this month, with a drop that included wraps, quilted skirts and sweatshirts. Actor Malaika Arora had sported one of their silk, floral-printed pyajama sets to a party recently.

Although Anamika dabbled in athleisure back in 2016, Viraj says that the AK-OK aesthetic is completely different from the main label, as their mother leaves the design process to them. “I studied business, while my brother opted for economics and psychology. Our design education came from years of observing and growing up in a fashion-friendly environment,” he laughs. Though they were involved in the finance and management side of their mother’s business, this was the first time the 25-year-olds took to the drawing board.

Viraj was largely involved in designing this collection, and the prints featured are collages he made during the lockdown. “I was cutting up magazines and creating abstract patterns, which we translated onto the bomber jackets and went with hand-drawn scribbles for the oversized T-shirts,” he explains, adding that the idea was to combine art and clothing in a “young and quirky way”. The site’s minimalist white background highlights these prints, and details of each outfit and pricing are displayed prominently. A kimono from AK-OK

The brand also includes chunky necklaces, embroidered earrings, beaten metal bangles and beaded waist belts. Viraj is working on a line of sculptures and painting which will be available soon. Meanwhile, Vishesh is involved in a menswear collection that is set to drop next year. “It has been quite challenging to launch a label, especially in terms of sourcing fabrics and production. We’re working at half capacity,” says Viraj.

Like many design houses that had to reinvent to bring in business, AK-OK was their way of pivoting and opening the brand to a larger market. Meanwhile, speaking for the Anamika Khanna label, Viraj says they are launching a new store in Kala Ghoda, Mumbai, this week. While this was in the works before the pandemic, changes have been made to keep up with market trends. “Customers are focussing on bridal wear and accessories. So, we have moved from Indo-western silhouettes to traditional outfits. We have also been cutting costs and are not overspending on non-essentials,” he concludes.