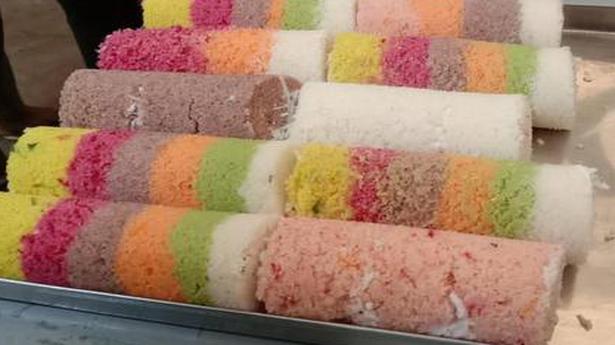 With the local body elections around the corner, the ‘political puttu’ at Amina’s Puttu Kada at Kuttichal in Thiruvananthapuram district is much in demand

‘Political puttu’ is a hot-seller in Amina’s Puttu Kada, a small, no-frills hotel in Kuttichal, about 28 km from Thiruvananthapuram. With the local body elections around the corner, this ‘political puttu’ is much in demand, and Zulfikar, the proprietor and chef, is only too happy to oblige.

Puttu, usually a mix of rice flour and grated coconut steamed in cylindrical containers, is a breakfast staple in the state. The ‘political puttu’ is in the colours of the flags of Kerala’s political parties. “For supporters of the Communist Party of India (Marxist) and the CPI, there is red puttu, coloured naturally with beetroot. Orange puttu, flavoured and coloured with carrots, is for followers of the Bharatiya Janata Party while the ‘Congress puttu’, aka ‘Sabari puttu’ [named after the area’s MLA KS Sabarinathan], comes in orange, white and green. I make the green by mixing edible leaves and herbs. For the Indian Union Muslim League members, there is the green-coloured puttu,” explains Zulfikar.

Ready to serve Zulfikar and Shaheena at Amina Puttu Kada; (below) some of their creations

Amina’s Puttu Kada was born five years ago when Zulfikar, a mill owner, decided to open a small restaurant that sold only puttu. Since he wanted to be different from the hotels andjoints at Kuttichal junction, he decided to specialise.

Star on the menu

According to Zulfikar, the star on the menu is ‘Sundari puttu’, which comes in six different colours and flavours. “So, there is rice flour, carrot, beetroot, greens, cornflour and ragi flour. It is healthy too, since it is filled with vegetables,” he adds.

In March, just before the lockdown, Zulfikar was selling 61 kinds of puttu, ranging from several varieties of sweet puttu to those made from ragi, cornflour, wheat and rice. “Children used to enjoy the puttu I used to make with chocolate, chocolate milk powders, biscuits, dates etc. I have stopped making those as most families are still not venturing out of home,” he points out, adding, “The lockdown was not easy to negotiate. So I added dosa, Kerala porottas and idiyappam to the menu.”

Business is limping back to normal, and Zulfikar hopes it will go full steam soon. He says that once the Elephant Rehabilitation Centre at Kottoor had reopened, visitors started trickling in during holidays.

“Before the lockdown, diners used to come all the way from the city to have puttu at my place. Meat and chicken curries and fries, kadala curry, payar and pappadam are served with the puttu,” he says.

Different kinds of flour, some infused with vegetables, to make the varieties of puttu at Zulfikar’s Amina Puttu Kada at Kuttichal, Thiruvananthapuram

At present, Zulfikar is cook, hotel and waiter at Amina’s. His only assistant is his wife, Shaheena. Although he has a youngster to make the porottas, the puttu is made only by the couple. “Since I have a mill, all the flour can be ground there. The rest of the work is done by one of us. I want to make sure that the puttu tastes the same every day. That is the USP,” he asserts.

The varieties of puttu are priced between ₹20 and ₹25. Zulfikar says that there are hardly any celebrities who would visit the place and go without tasting the puttu at Amina’s.