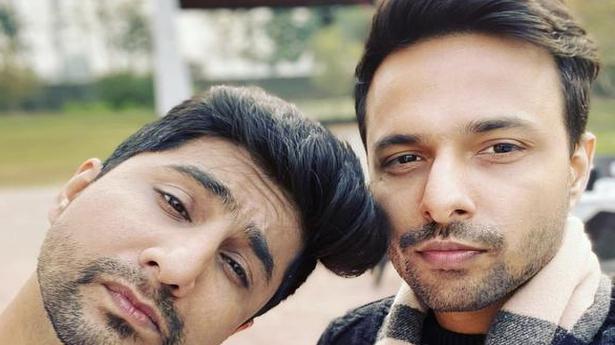 During a video call with Yogi and Kabeer, Yogi gazes at his long-term partner with complete adoration as Kabeer explains how their first — India’s first Hinglish podcast following an openly gay couple — is not about taking an activist stance but more of a storytelling format with life lessons and humour in equal measure. Shuddh Desi Gay was launched on Spotify on January 18, with the first episode directly tackling the debate of monogamy within homosexuality.

Currently in a long-distance relationship with Yogi in Mumbai and Kabeer in Delhi, the two first met while working at the same organisation years ago, though they never worked together directly. Eventually, they fell in love and overcame obstacles to be in the healthy place they are in now, six years later.

Kabeer, whom Yogi calls his “desi foreign boyfriend” recalls how Yogi pitched the podcast idea to him. “He told me, ‘I want this to be a ‘how I met your father’ journal for our kids someday!” he laughs. Yogi justifies this, “There are podcasts on the LGBTQI+ community in India, but none just for the gay community and relationships. Yes, love is love, but I wanted something personal. There is such little literature on gay relationships out there.”

Coming together for the podcast proved to be a landmark milestone for their relationship, agrees Yogi. “In relationships, you are always learning about the other person especially when you are in a different capacity. We learned that while we do the podcast, we are ‘Yogi and Kabeer, the podcasters.’ Our mindset of still being a couple is there at the core; it is highly intertwined. Yes, we have our claws out sometimes, but we discount that as just another fight.” Yogi is proud of the times they find themselves learning more about the other person and adds, “The balance is tricky but it is worth it!”

Shuddh Desi Gay has three audiences in mind: the closeted gay who needs support in their journey, the openly gay who is loud and proud, and the people who are “completely oblivious or curious” about gay relationships. However, the pair are firm that the reach of the show extends to the Hinglish-speaking community of the country as that is where the narrative of gay relationships needs to be normalised. “With this format, we can have an actual conversation with local references which listeners can identify with, and the reality checks are more clear for the listener,” adds Yogi.

Indeed, many identified and understood the couple’s journey. Yogi likens the nerves on the day of the first episode to those of writing board exams, but he is grateful for the happy messages that poured in. Kabeer adds they are “overwhelmed and are still in the afterglow” of the first episode. He recalls the messages of support and kindness from not just loved ones, but strangers too, elaborating, “I was especially moved by a message in which someone said they could not stop crying but also smiling while listening to our podcast. That person said that, for the first time, they had a point of reference.”

Yogi and Kabeer have a lot of themes to tackle such as marriage and society, so they admit they do not have any plans to have guests on board just yet, though they are open to it down the line. Right now, they are just revelling in the love for all things Shuddh Desi Gay. “We’ve poured our heart out into this podcast and it has been so cathartic,” concludes Kabeer.