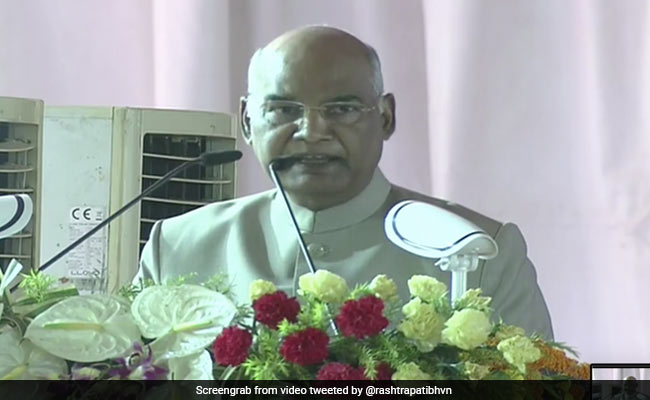 President Ram Nath Kovind on Sunday said without the development of the tribal community and forest dwellers, growth of society and the country cannot take place.

He said this while addressing a gathering in Sonbhadra’s Chapki after inaugurating a newly constructed building of a school and hostel of Seva Kunj Ashram run by the Seva Samarpan Sansthan.

Later in the day, the President offered prayers at the Vindhyavasini temple in Mirzapur. He is on a three-day tour of the state.

“In the same way, if society and the country have to move ahead, then the forest dwellers”” community has to be first taken ahead,” he added.

Remembering legendary tribal leader Birsa Munda on the occasion, the President said he struggled relentlessly to protect the forest wealth and culture from the exploitation of the British.

His life has been a source of inspiration not only for tribals but for all citizens.

The President noted that the construction of the school and hostel buildings was undertaken by the NTPC. He appreciated the state-run company for this social welfare work.

He expressed confidence that the newly constructed buildings and other facilities will contribute to all-round development of students of the institution.

President Kovind said Sonbhadra shares border with four states and the schools and hostels operating at such a place will benefit students belonging to the community in Uttar Pradesh and areas of the adjoining states.

“The soul of India resides in areas of the tribal community and forest dwellers. If anyone wants to get introduced to this culture, then he/she should spend time in districts like Sonbhadra,” he said.

President Kovind said for him a “vanvaasi” area is like a holy place and the forest dwellers will make the country proud if they feel encouraged.

Laying stress on the growth of backward castes, Dalits, tribals, he asked Governor Anandiben Patel and Chief Minister Yogi Adityanath to coordinate with the Centre and take the forest dwellers ahead.

“Without the development of the tribal community, holistic development is incomplete. The Centre and the state governments are running a number of programmes for them. Talented people hailing from the forest dwellers” community have done good things in the country,” the President said.

He said work is being done to preserve the memories of the great personalities, folk art and songs.

Speaking on the occasion, UP Governor Anandiben Patel hailed women’s role in running a family.

She also said, “A country cannot progress if one does not rise above personal interest. Interest of the nation is of highest priority.”

“In Uttar Pradesh, the maximum number of forest dwellers and tribals reside in Sonbhadra. The state government is going to establish a medical college here,” Yogi Adityanath said.

Yogi Adityanath also praised the NTPC, saying compassion and service towards the tribal population is testimony to true nationalism and the company has displayed it consistently through their good work for the communities.

In Mirzapur, the President visited the Vindhyavasini temple. He was accompanied by his wife and daughter. He also performed a “havan”.

According to District Magistrate Praveen Kumar Laxkar, the President said there should be some more space inside the temple. The DM said the President desired that galleries and verandah leading to the idol of the Goddess should be broadened.