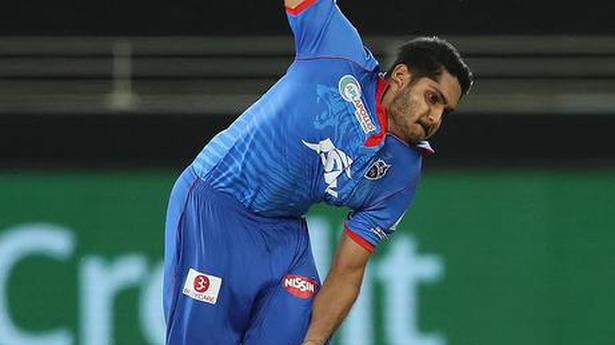 He has played a key role in Mumbai winning its first Vijay Hazare Trophy title in more than a decade. He has represented India-A as well. But it took his IPL debut for Tushar Deshpande to start trending on social media.

The Mumbai speedster who still lives in Kalyan, an eastern suburb more than 60 km far from his alma mater Shivaji Park Gymkhana in Dadar, was handed an IPL debut by Delhi Capitals versus Rajasthan Royals on Wednesday. It must have meant a hell a lot for the 25-year-old who earned an IPL contract for the first time in 2020.

Interestingly, Deshpande was a ball-boy at the Wankhede Stadium during the IPL’s maiden edition in 2008. “I remember our full under-13 team was at the IPL and I was overawed to see the likes of Dhawal Kulkarni, Abhishek Nayar, Pinal Shah, Dwayne Bravo, Shaun Pollock and, obviously, Sachin Tendulkar in action,” Deshpande had told Sportstar before leaving for the UAE.

“I remember there used to be a fridge full of Gatorade cans just outside the boundary rope. For a 13-year-old, more than watching and learning from the greats, the main aim used to be to open that fridge, get a can or bottle and sip it while enjoying the match. That’s the first IPL memory.”

Deshpande, who joined Mumbai’s T20 squad for the Syed Mushtaq Ali Trophy three days after his mother’s demise last year, has been training with Capitals captain Shreyas Iyer since childhood at the Shivaji Park Gymkhana. In fact, the duo would often place an egg-sandwich bet in the nets.

“I remember when we were together in the (Shivaji Park) academy, we didn’t really get along. Even now we are not the thickest of friends but we have immense mutual respect for each other. In the academy, we would have a mini-competition in the nets and the bet used to be whosoever loses will treat the other with egg sandwich and Bournvita in the gymkhana,” Deshpande said.

“Most of the times, I used to win because I knew how to bowl to him. When you are young, you don’t plan too much, all you think of is how I’ll dismiss a batsman off every ball. Sometimes he also used to win because he too is mentally very strong but majority I would win.”