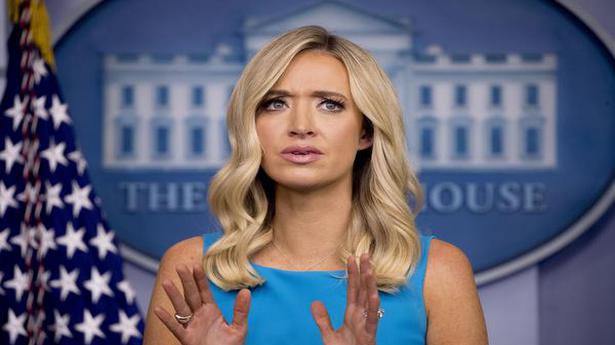 Move comes in the wake of the Secretary sharing a report alleging corruption by Joe Biden’s son.

Mr. Trump and his campaign alleged that this was because of a story from the New York Post which made allegations against Mr. Biden’s son Hunter Biden that he leveraged access to his father in exchange for payments through his position on the board of a Ukraine company.

Addressing an election rally in the battleground state of Iowa, Mr. Trump said, “They closed down her account. She’s the White House press secretary. Because she’s reporting the truth, they closed down her account. So let’s see what’s going to happen. We’ve just learned through explosive documents published by a very fine newspaper, the New York Post that Joe Biden has been blatantly lying about his involvement in his son’s corrupt business dealings.”

“And this is a big, smoking gun. The newly uncovered e-mails revealed that a top executive from the highly questionable Ukrainian company, it’s an energy company, which paid Hunter at least $50,000 a month but it’s now looking like it could be $183,000 a month and that’s a lot of money,” he alleged.

Despite the fact that he had absolutely no experience and knew nothing about energy, he wrote to Mr. Hunter, arranging for a meeting to meet with former Vice President Joe Biden, he claimed.

“The same Ukrainian energy executive even sent Mr. Hunter an email saying ‘we urgently need your advice on how you could use your influence’ In other words, Mr. Hunter was being paid for access to his Vice President father who was specifically put in charge of Ukraine and Russia,” he alleged.

On her official White House account, Ms. McEnany tweeted censorship should be condemned and that it was not the American way .

Attacking the former Vice President, Mr. Trump said that the e-mails published by New York Post shows that Mr. Biden’s repeated claim that he has never spoken to Mr. Hunter about his business dealings were a “lie“.

“Was a total lie. He lied to you over and over cause he’s trying to cover up a massive pay-for-play scandal at the heart of his vice presidency. And everybody knows it. Everybody in Washington knows it,” he said.

“We’ve known it for a long time. The fact is, there was never an administration more corrupt than the Obama-Biden administration. Just weeks ago, Joe stood before the American people in a presidential debate and told you that these claims had been totally discredited and that his son did nothing wrong. But now that turns out to be a total lie. Now we can see clearly that Mr. Biden is a corrupt politician who shouldn’t even be allowed to run for the presidency,” he said.

Mr. Trump alleged that he was pressing Mr. Biden to tell the truth because “the corrupt mainstream media refused to write the story“.

Twitter announced earlier that it was taking action to block any URLs, links, images or material by removing tweets that violated its Hacked Materials Policy .

In a tweet later in the evening, Twitter CEO Jack Dorsey said that the move to block the New York Post article on alleged e-mails on Hunter Biden’s laptop was “unacceptable“.

“Our communication around our actions on the @nypost article was not great. And blocking URL sharing via tweet or DM with zero context as to why we’re blocking: unacceptable,” he said in a tweet.

Twitter in a series of tweets gave its explanation. “We want to provide much needed clarity around the actions we’ve taken with respect to two NY Post articles that were first tweeted this morning,” it said.

The images contained in the articles include personal and private information – like email addresses and phone numbers – which violate our rules, Twitter said, adding that it is also currently viewing materials included in the articles as violations of its Hacked Materials Policy.

“We know we have more work to do to provide clarity in our product when we enforce our rules in this manner. We should provide additional clarity and context when preventing the tweeting or DMing of URLs that violate our policies,” Twitter said.

“The policy, established in 2018, prohibits the use of our service to distribute content obtained without authorisation. We don’t want to incentivise hacking by allowing Twitter to be used as distribution for possibly illegally obtained materials,” it said.

Noah Mansker, a business reporter with the New York Post said that the daily’s Twitter account has also been locked because the Hunter Biden stories violate its rules against “distribution of hacked material.”

US Google Antitrust: 5 takeaways from US government’s lawsuit against Google

FBI has Hunter Biden laptop, does not believe emails tied to Russia: Reports