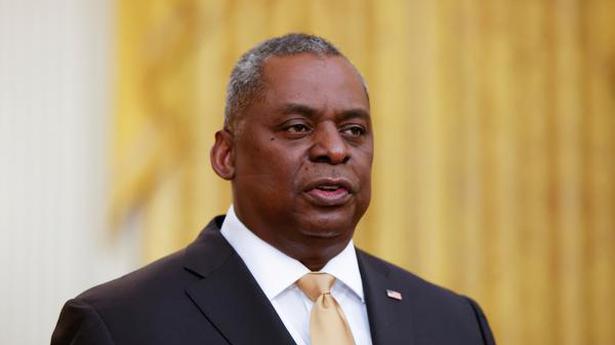 American Secretary of Defense Lloyd Austin will visit India from March 19 to 21 and meet Defence Minister Rajnath Singh and other leaders as part of his maiden visit abroad, the Pentagon announced on Wednesday. The dates of the visit were released by the Defence Ministry. The Secretary, whose trip begins on Saturday, will also visit Japan and South Korea and the U.S. Indo-Pacific Command in Hawaii. It would reinforce the U.S.’s commitment to the Indo-Pacific, the Pentagon said.

“Secretary Austin will meet his counterparts and other senior officials to discuss the importance of international defence relationships, and reinforce the United States’ commitment to a free and open Indo-Pacific region — founded on respect for international rules, laws, and norms,” the Pentagon said.

“In India, Secretary Austin will meet his counterpart, Minister of Defence Rajnath Singh, and other senior national security leaders to discuss deepening the U.S.-India Major Defense Partnership and advancing cooperation between our countries for a free, prosperous and open Indo-Pacific and Western Indian Ocean Region,” the statement said.

“Both Sides are expected to discuss ways to further strengthen bilateral defence cooperation and exchange views on regional security challenges and common interests in maintaining a free, open and inclusive Indo-Pacific region. Discussions regarding defence cooperation would also focus on how both countries could consolidate military-to-military cooperation and defence trade and industry cooperation,” a Defence Ministry statement said, adding that India being part of Mr. Austin’s first official trip as Secretary underscored the strength of the U.S.-India strategic partnership.

India and the U.S. have witnessed a broadening and deepening of their security partnership, across both Democrat and Republican administrations. Growing Chinese assertiveness has also brought them closer in terms of security cooperation.

There are several big ticket defence deals in the pipeline. A proposal for 30 armed drones, 10 for each Service, from General Atomics estimated at over $3 billion, is at advanced stages of being cleared by the Defence Ministry.

Last November, the Navy inducted two MQ-9B Sea Guardian unarmed drones procured from the U.S. on lease for one year.

India is keen on upgrading defence equipment and buy more arms, and the U.S. is keen on meeting this demand. India was designated a Major Defense Partner in 2016 by the Obama administration and during the Trump administration it acquired Strategic Trade Authorization tier 1 status — enabling the transfer of sensitive high-tech equipment. The two countries have also signed the U.S.’s three foundational agreements that enable and facilitate closer defence cooperation and greater inter-operability between the two defence systems.

“In Japan, Austin will join U.S. Department of State Secretary Antony Blinken, for the U.S.-Japan Security Consultative Committee (“2+2”), hosted by Japan’s Minister for Foreign Affairs Toshimitsu Motegi and Minister of Defense Nobuo Kishi, to emphasize that the U.S.-Japan Alliance has never been more resolute and resilient — the cornerstone of peace and security in a free and open Indo-Pacific in the face of long-term competition with China,” the Pentagon’s statement said.

In South Korea, the Americans will be hosted by Foreign Minister Chung Eui-yong and Minister of Defence Suh Wook. There, they will, “reaffirm the United States’ ironclad commitment to the security of the Republic of Korea, and emphasize that the U.S.– ROK alliance remains a linchpin of peace, security, and prosperity in northeast Asia, a free and open Indo-Pacific, and around the world” according to the Pentagon.

On Friday the first-ever Quad leaders’ summit will be held in which Prime Minister Narendra Modi, U.S. President Joe Biden, Prime Minister Scott Morrison of Australia and Prime Minister Yoshihide Suga of Japan will take part. The scheduling of this event is another sign that the Indo-Pacific is high priority for the Biden administration, the White House had said on Tuesday.