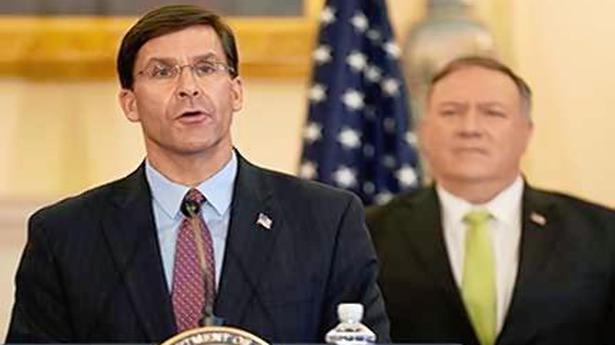 India and the U.S. will discuss “salient regional” issues when U.S. Secretary of State Mike Pompeo and U.S. Defence Secretary travel to India next week for the “2+2 Ministerial dialogue”, the government said on Thursday, in an indication that ties with China will be on the agenda for talks on October 27.

“The Third India-U.S. 2+2 Ministerial Dialogue will entail a comprehensive discussion on cross-cutting bilateral issues of mutual interest. In addition, both sides will also exchange views on salient regional and global issues,” said Ministry of External Affairs spokesperson Anurag Srivastava during a weekly briefing with journalists.

Also read | India will be most consequential partner for U.S. in Indo-Pacific this century: U.S. Defence Secretary Mark Esper

On Wednesday Mr. Pompeo had said talks during his visit will include “discussions on how free nations can work together to thwart threats posed by the Chinese Communist Party.”

However, the MEA did not respond to a specific question about whether LAC tensions, and the ongoing talks with China would feature during the 2+2 meeting, nor would Mr. Srivastava comment on which agreements, including the geo-spatial agreement BECA would be signed at the meetings, adding that he would rather not “prejudge the outcomes” of the visit.

“India and U.S. have a comprehensive global strategic partnership which includes political, security and defence, economic, commercial, technology and people-to-people contacts. We have regular dialogue for various levels to discuss ongoing bilateral cooperation and to exchange views on developments in the region,” the MEA statement said.

Also read | India and U.S. have been too cautious on China, says U.S. official

The MEA denied that the timing of the visit of senior U.S. officials exactly one week before U.S. elections on November 3, was unusual, and said it followed the pattern of “2+2” meetings in previous years.

“As regards the timing of the meeting, you know that diplomatic calendars have their logic, and you will notice that the earlier two meetings have been held towards the end of the year,” Mr. Srivastava said in response to a question from The Hindu.

In a separate response on progress in border negotiations with China, the MEA said, “India and China continue to have discussions through both diplomatic and military channels to peacefully resolve the issues along the LAC in India China Border areas.. []The immediate task is to ensure a comprehensive disengagement of troops in all the friction areas.”

Mr. Pompeo and Mr. Esper will arrive on October 26 and meet with their counterparts External Affairs Minister S. Jaishankar and Defence Minister Rajnath Singh the next day. They are also scheduled to meet Prime Minister Narendra Modi and National Security Advisor Ajit Doval.

Mr. Pompeo will also travel to Maldives, Sri Lanka and Indonesia during the visit, where his focus will remain on the U.S.’s Indo-Pacific strategy, which he has frequently repeated, will involve “countering” the challenge from China.

The 2+2 Foreign and Defence Minister’s mechanism, which was announced by U.S. President Trump and PM Modi during their first meeting in 2017, was held in Delhi in September 2018 and in Washington DC in December 2019. It replaced the “India-U.S. Strategic and Commercial dialogue”, involving the Foreign and Commerce Ministers, announced by then U.S. President Barack Obama and PM Modi in 2015.