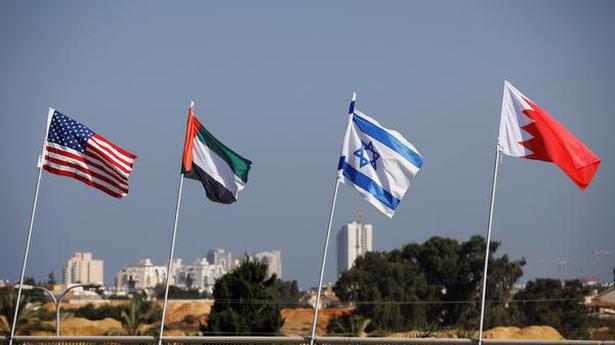 Bahrain and the UAE formally signed the agreement to normalise relations with Israel in a ceremony at the White House on Septemer 15.

A joint American-Israeli delegation was set to fly to Bahrain on Sunday on the first direct Israeli commercial flight to the Gulf Arab state, where they’ll be signing a number of bilateral agreements following an announcement last month to normalise relations.

El Al flight 973 – a nod to the international dialing code for Bahrain – will fly through Saudi Arabia’s airspace en route to Manama, where dignitaries from all three countries will speak at a ceremony after landing.

“It will be the official establishment of the diplomatic relations between the two countries,” an Israeli diplomatic official said, speaking on condition of anonymity pending the official announcement.

The decision to establish ties with Israel has outraged the Palestinians, whose leadership has blasted the Bahraini move, and a similar Emirati deal, as a betrayal and an undermining of the Arab stance that recognition of Israel should come only after Palestinians achieve an independent state of their own.

As part of the deal to normalise relations, the two Gulf Arab states and Israel will eventually establish embassies and exchange ambassadors. The Israeli official said the Israeli embassy was expected to open in Bahrain in the coming months.

Similar to the United Arab Emirates, Bahrain is expected to open its embassy at some point in the city of Tel Aviv, where most foreign embassies are located because of Jerusalem’s contested status.

Bahraini and Israeli officials have held numerous conversations since announcing their intention to establish full ties. Sunday’s face-to-face meetings, however, are seen as another step toward normalisation.

Meanwhile, Israel and the UAE have already signed a number of business, banking and intergovernmental agreements.

Bahrain and the UAE formally signed the agreement to normalise relations with Israel in a ceremony at the White House on Septemer 15. Egypt and Jordan are the only other two Arab states to sign diplomatic treaties with Israel, in 1979 and 1994, respectively.

The accords made public what had been a gradual strengthening of quiet ties between Israel and several Gulf states – forged in recent years over a shared concern over regional rival Iran. Other Arab countries could follow suit, with analysts and insiders pointing to Sudan, Oman and Morocco as possibilities.

The Israeli delegation is slated to fly back to Tel Aviv later on Sunday, while the Americans will head to the UAE before flying to Israel on Tuesday.