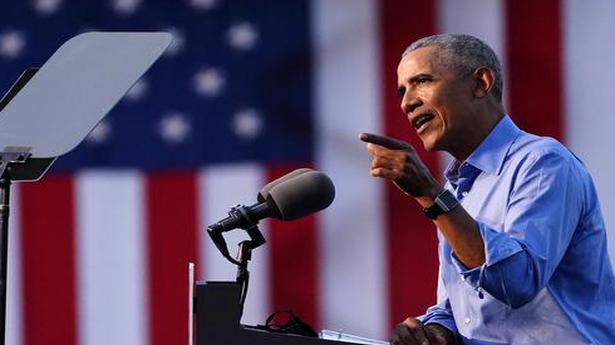 With less than two weeks until Election Day, the former President urges Black men not to give into apathy

With less than two weeks to go before Election Day, former U.S. President Barack Obama campaigned in Pennsylvania for his former Vice President and Democratic nominee Joe Biden. At a drive-in rally in Philadelphia, Mr. Obama delivered an impassioned speech, in which he painted a picture of a highly dysfunctional President, Donald Trump, and his failing administration, while he made a character and policy-based case for a Biden-Harris administration. Mr. Obama said Mr. Trump was not interested in the job and was using the presidency as a reality show to get attention.

Mr. Obama criticised Mr. Trump’s handling of the coronavirus pandemic, saying at least 2,22,000 Americans had died, millions of jobs were gone and 1,00,000 small business were closed. He compared South Korea and Canada’s handling of the pandemic to the U.S.’, which has been far worse in terms of mortality and infections than the other two countries in question.

“Donald Trump wants to take full credit for the economy he inherited and no responsibility for the pandemic he ignored,” Mr. Obama said.

Mr. Obama took a shot at Mr. Trump for having a bank account in China. The New York Times had reported earlier this week that Trump International Hotels operated an account in the country.

“Listen, can you imagine if I had had a secret Chinese bank account when I was running for re-election? You think Fox News might have been a little concerned about that? They would’ve called me ‘Beijing Barry’,” Mr. Obama told the audience at the rally.

Mr. Obama vouched for Mr. Biden’s character, saying he had empathy and decency. He criticised the Republicans for repealing and not replacing the Affordable Care Act ( “Obamacare”) and said Mr. Biden and his running mate Kamala Harris would expand Medicare (public health insurance) and create green jobs as part of Mr. Biden’s $ 2 trillion climate plan.

Mr. Obama kept returning to the theme of the President’s conduct.

“With Joe and Kamala at the helm, you’re not going to have to think about the crazy things they said every day. And that’s worth a lot,” Mr. Obama said.

“You’re not going to have to argue about them every day. It just won’t be so exhausting. You, you might be able to have a Thanksgiving dinner without having an argument. You’ll be able to go about your lives, knowing that the President is not going to retweet conspiracy theories about secret cabals running the world or that Navy Seals didn’t actually kill Bin Laden. Think about that, the President of the United States retweeted that,” he said referring to a bizarre conspiracy theory that Mr. Trump had retweeted, according to which Mr. Obama and Mr. Biden had U.S. soldiers killed to cover up a plot related to Osama Bin Laden.

Mr. Obama said that with a Biden-Harris administration, the country would not have to deal with a President who insulted or threatened people who disagreed with him.

“There are consequences to these actions,” Mr. Obama said animatedly. “They embolden other people to be cruel and divisive and racist and it frays the fabric of our society. And it affects how our children see things. And it affects the ways that our families get along. It affects how the world looks at America,” he said.

Mr. Obama urged people to vote, and said that he did not care about the polls because the polls had got the results wrong in 2016 presidential elections. Mr. Biden is leading nationally and in Pennsylvania as per polls.

The former President said America was a “good and decent place” and asked people to trust Mr. Biden and Ms. Harris to “lead this country out of these dark times.”

“Honk if you’re fired up, honk if you’re ready to go,” Mr. Obama said to the drive-in rally attendees who responded by honking.