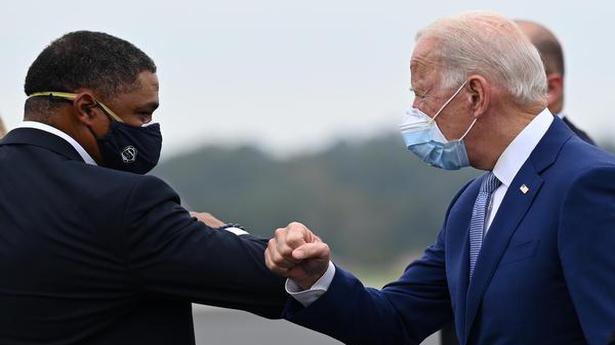 Leading his Republican rival in national opinion polls, Mr. Biden landed in Georgia, which has not supported a Democrat in a U.S. presidential election since 1992.

Just a week ahead of the Nov. 3 election, President Donald Trump and Democrat Joe Biden are criss-crossing the country on Tuesday in an intense day of campaigning, with Mr. Biden making a thrust into traditional Republican territory in a show of optimism.

Leading his Republican rival in national opinion polls, Mr. Biden landed in Georgia, which has not supported a Democrat in a U.S. presidential election since 1992.

He was due to speak in Warm Springs, at the vacation home of former President Franklin Delano Roosevelt, the Democrat who led the nation of the Great Depression and through World War Two. A banner reading “Battle for the soul of the nation” hung above the stage where Mr. Biden was to speak.

The 2020 presidential campaign has been unlike any other as a raging coronavirus pandemic that has so far killed more then 225,000 Americans pushes record early voting.

In another show of confidence in the Mr. Biden camp, former New York mayor Michael Bloomberg said on Tuesday he will spend around $15 million on television advertising in Texas and Ohio in the coming days.

Texas has long been seen as a bridge too far for Democrats in a presidential election and not worth the expenditure in the last days of a campaign.

Bloomberg, who lost to Mr. Biden in a crowded field for the Democratic nomination, decided to make the ad buys after reviewing polling data from multiple states on Monday, a spokesperson said by email.

In Georgia, opinion polls show the race to be tight, and a win by Mr. Biden there would likely be a severe blow to Mr. Trump’s chances. Mr. Biden told reporters on Monday he believes he has a ”fighting chance” to take Georgia.

He will hold an afternoon event in Warm Springs, Georgia, before capping the day with an evening rally in Atlanta.

The aggressive move also carries risks for Mr. Biden, whose trip to Georgia precludes visits to more traditional battleground states that can swing toward either party’s candidate.

More than 66 million votes have been cast so far, approaching half the total 2016 vote, according to the U.S. Elections Project at the University of Florida.

The huge volume of mail ballots could take days or weeks to tally, experts have said. Mail voting is nothing new for the United States – about one in four ballots were cast that way in 2016 – but is surging amid the pandemic.

Mr. Trump, who has repeatedly and without evidence claimed that mailed ballots are likely to be subject to fraud, on Monday said on Twitter: “Must have final total on November 3rd.” Twitter flagged the tweet with a disclaimer describing the post’s content as “disputed” and potentially misleading.

Mr. Trumps planned rally in Nebraska, meanwhile, suggests his campaign is preparing for a close finish. The state apportions three of its five electoral votes by majority vote in its three congressional districts, with the Omaha-area district a potential pick-up opportunity for Mr. Biden while the rest of the state is expected to go for Mr. Trump.

In a scenario where Mr. Trump and Mr. Biden finish close to a tie in the U.S. Electoral College, that Omaha district with its single vote could make the difference of clinching the 270th elector needed to win. Mr. Trump’s rally is also likely to draw attendees from neighboring Iowa, another state that is likely to be competitive.

On Tuesday, Mr. Trump also stages rallies in Michigan and Wisconsin – two states he won by narrow margins in 2016 but where polls show him now trailing Mr. Biden – before stopping overnight in Nevada.

Mr. Trump will be able to tout the confirmation of his nominee Amy Coney Barrett to the U.S. Supreme Court. Barrett cleared the Senate on Monday and was sworn in during a night-time outdoor ceremony at the White House, meeting the president’s goal of having her on the court by Election Day.

In a string of early morning posts on Twitter on Tuesday, Mr. Trump questioned Mr. Biden’s potential handling of the top court, and again played down the COVID-19 pandemic despite the record numbers of new U.S. cases in recent days.

Former President Barack Obama was also back on the trail in Florida on Tuesday to boost Mr. Biden, his former vice president.

At a drive-in rally in Orlando, Mr. Obama attacked Mr. Trump’s record on the coronavirus and urged Democrats to vote in large numbers to avoid a repeat of the 2016 election when Mr. Trump won the battleground state and defeated Hillary Clinton.

“We have to leave no doubt. We can’t be complacent,” he said. “We were complacent last time. Folks got a little lazy, folks took things for granted, and look what happened. Not this time, not in this election.”