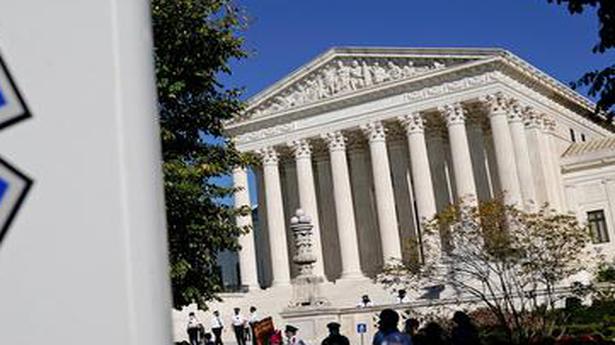 Republicans had approached the U.S.’s top court for an emergency stay on the extended counting period.

In a victory for Democrats, the Supreme Court of the United States declined to stay a Pennsylvania Supreme Court order allowing some postal ballots received for up to three days after Election Day (November 3) to be tallied provided they are postmarked by November 3. Republicans had approached the U.S.’s top court for an emergency stay on the extended counting period — a special accommodation for the pandemic.

The Hindu Explains | What is the debate around mail-in postal ballot system in U.S. presidendial polls?

Both U.S. President Donald Trump and his Democratic opponent Joe Biden are hoping to win this crucial swing state which Mr. Biden is leading overall, as per polls. Mr Trump won the state by less than a percentage point in 2016.

A stay on the Pennsylvania Supreme Court order permitting extended counting would have needed the assent of at least five U.S. Supreme Court judges. With Chief Justice John Roberts siding with the liberal judges, the bench was tied four and four. As is normal for emergency rulings , no reasoning was provided by the court.

The ruling renews focus on how election-related judgements will go with a new potential justice — Amy Coney Barrett ( a Trump nominee) — who could be confirmed by the U.S. Senate as early as next week in time for the elections

We have been keeping you up-to-date with information on the developments in India and the world that have a bearing on our health and wellbeing, our lives and livelihoods, during these difficult times. To enable wide dissemination of news that is in public interest, we have increased the number of articles that can be read free, and extended free trial periods. However, we have a request for those who can afford to subscribe: please do. As we fight disinformation and misinformation, and keep apace with the happenings, we need to commit greater resources to news gathering operations. We promise to deliver quality journalism that stays away from vested interest and political propaganda.