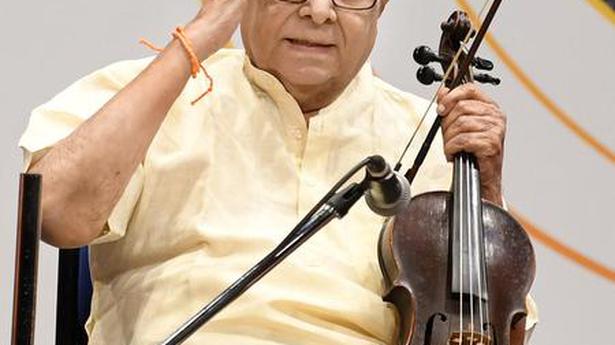 Violin maestro T.N. Krishnan, whose playing represented the pristine beauty of Carnatic ragas, died here on Monday. He entered the music world as a child prodigy and performed till his last days. He was 92, and is survived by wife Kamala, son Sriram Krishnan and daughter Viji Krishnan, who often accompanied their father.

“None was as gifted as Krishnan when it came to capturing the essence, taste and life of ragas. He had clarity about what he thought was good music and he followed it unwaveringly,” said singer and author T.M. Krishna, who, like Krishnan, is a disciple of Semmangudi Srinivasa Iyer.

Born Tripunithura Narayanaiyer Krishnan in 1928 in Kerala, he learnt music from his father A. Narayana Iyer. He gave his first solo violin concert in Thiruvananthapuram in 1939 as a boy of 11. He had a mentor in Alleppy K. Parthasarathy, and Krishnan had always acknowledged the support rendered by him during the early days of his career.

He shifted his base to Chennai in 1942 and came under the tutelage of Semmangudi Srinivasa Iyer and his career graph emerged.

Krishnan also excelled as a teacher and he was the professor of music at the Music College, Chennai. Later, he became the Dean of School of Music and Fine Arts, University of Delhi. He was known as Professor Krishnan in the music world. He won many awards, including Sangita Kalanidhi of the Music Academy and the Padma Bhushan and the Padma Vibhushan.

“His greatest assets are his understanding of ragas and conviction about music. Even though so many things changed over decades in the music world, he had the conviction about good music and would only offer that — if you like it you come to my concert. It is very difficult to have such a conviction and be successful,” explained Mr. Krishna.

“You will not come across a single non-musical phrase in his playing. You cannot say he experimented with music, but brought out the existing beauty of the Carnatic ragas and you have to be in his concerts to realise how he would reach the higher octaves,” said Lalitharam, the biographer of vocalist G.N. Balasubramaniam and mridangam player Palani Subramania Pillai, with whom he had teamed up for many concerts.

He also recalled a particular concert in the Music Academy. “Krishnan played Harikamboji and explained that he played it to tell the world that it could be done without the traces of Khamas, Kamboji and Karaharapriya,” Mr. Lalitharam said.