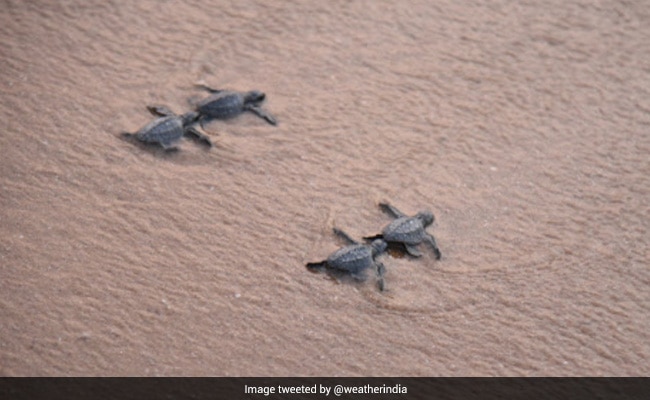 The tiny turtles on Visakhapatnam beach made a happy sight

It’s been good news for wildlife lovers for the last few weeks. Turtles are back along the coastlines of Andhra Pradesh, Tamil Nadu and Odisha. The forest department of the Andhra Pradesh government released over 350 turtles into the sea on Wednesday. A video of the baby turtles waddling into the sea is being widely shared by netizens. This year in Visakhapatnam over 50,000 turtle eggs were collected and 5,000 baby turtles have been released so far, according to news agency ANI.

Earlier this month a large number of baby turtles were released into the sea In Tamil Nadu. The Olive Ridley turtles arrive at the shore in December and January to lay eggs. They are known to prefer the quiet Pattipulam area near Mahabalipuram beach for nesting.

The engangered Olive Ridley turtles have also arrived at Gahirmatha beach in Odisha’s Kendrapara for mass nesting. The Gahirmatha beach is the world’s largest known rookery of Olive Ridley turtles. The annual mass nesting of these delicate marine animals began on Tuesday night in Nasi-2 beach of the Gahirmatha nesting ground. ”The number of female turtles that crawled onto the beach to dig pits by flippers and lay eggs was on a lesser scale. We are expecting a large turnout of turtles in the coming days for the Arribada,” Debashis Bhoi, the forest range officer of Gahirmatha told news agency Press Trust of India. Arribada is the unique mass nesting of turtles.

The officials are yet to count the number of nests dug by the turtles so far. However, around 2,000 turtles had turned up to lay eggs, Mr Bhoi said. The mass nesting is likely to continue for at least 10 days. Around 7.30 lakh Olive Ridley turtles had turned up for mass nesting in 2019-20 nesting season in Odisha. Wildlife department staff are on vigil round-the-clock vigil to keep predators like jackals and wild dogs away.

(With inputs from ANI, PTI)