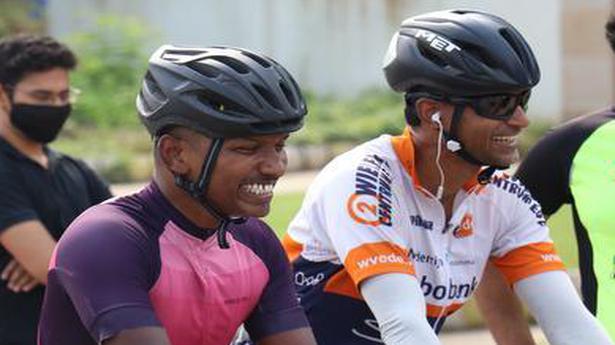 Cyclist, Gokul Krishna and Chitti Babu from Hyderabad completed the sporting challenge October 2, 2020. We explore the concept of everesting and what it entails:

Everesting is a sporting challenge that requires a sportsperson to run or cycle up and down a hill (or on a trainer set at an incline) until they reach the total vertical elevation equivalent to the height of Mt Everest. The rules on Everesting.cc say that the person must go up and come down the same way multiple times, taking U-turns at the bottom (downhill cannot be a different route) until you climb 8,848 metres.

Colleagues Chitti Babu and Gokul Krishna from Hyderabad completed the challenge on October 2, cycling in 26 hours and 27 hours respectively, without a break to sleep, as the rules say. Gokul in fact continued until he reached a total elevation of more than 10,000 metres, while Chitti Babu did a climb of 9,000 meters. This makes Gokul the first Indian to make it to the 10k club.

To date 12,236 have participated from 97 countries across the world, and their names feature in the Hall of Fame (on Everesting.cc) alongside the best climbers in the world. “Hyderabad’s terrain does not offer a climb so the first challenge was to find a hill. We started training in August. It was also necessary to see that the route was safe for us, as we would have to do a day and night climb,” says Gokul.

They decided to raise awareness and funds for the Dr Maxwell Trevor Cycling Academy, whose main focus is to train the underprivileged.

“In the path chosen, there was a flat part in the beginning of the uphill section. Our focus was to take a sip of water/energy drink mix, reset lap on our Wahoo, and ensure we built up speed to the start of the climb. It worked well initially, but on D-Day we started getting very tired,” explains Chitti Babu.

Guwahati-based Dr Sanjeev Handique feels Everesting is “a test of endurance”, while Arpo a Delhi-based cycling coach says, “One needs a lot of planning before one even attempts it. The support team is equally crucial.” The duo chose to start at night to escape the heat, supported by friends and fellow cyclists who rode with them in turns.

“One of the things I learnt from Dr Maxwell Trevor is that belief is the most important thing. When I started contemplating Everesting post lockdown, I was so unsure that I didn’t dare tell myself I would attempt it. So I picked a day when I was out for a walk with my family and explained to them about Everesting and that I wanted to attempt it,” says Gokul. That crystalised his decision.

Gokul says, “Climbing is all about watts per kilogram. So the key aspects were to increase my FTP (functional threshold power, the maximum amount of power one can hold for an hour), and lose about 10 kilograms. By giving up sweets and following a vegan diet I lost about seven kilograms, but was happy given the time available.”

He adds, “I rode a few times a week on my trainer and used Sufferfest (an app for cyclists). I made sure we had at least one day per week of four-eight hours of riding with about 2,000-3,000 metres of elevation gain. The target was a weekly elevation of about 5,000 metres…. I was very disciplined and used the spare time to catch up on much-needed sleep.”

In this column, we demystify the buzzwords in wellness.