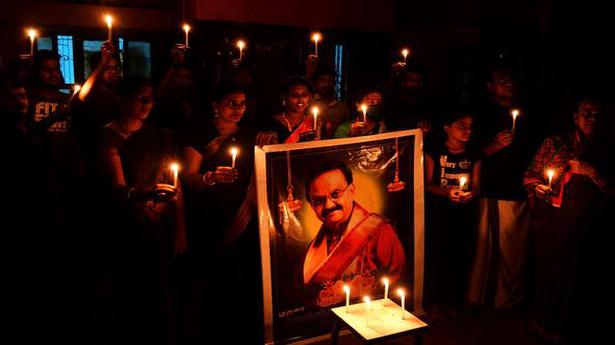 The passing away of legendary playback singer S.P. Balasubrahmanyam (SPB) has made me recall my experience of listening to his songs from when I was in primary school. While SPB sang over 40,000 songs across 16 languages, for me he will live on in the half-a-dozen songs he sang for one Telugu movie. To me these songs highlight the unparalleled power that music possesses to germinate paths of discovery.

For many of us from the South, SPB is synonymous with the Telugu movie Sankarabharanam. Though Tamil is my mother tongue, the incredibly melodious songs sung by SPB in this movie left an indelible mark on me. At a young age, when Carnatic music can seem like Greek and Latin to someone who did not learn it, these songs got deeply rooted in my psyche. When I now wonder why these songs had such a profound impact on my young mind, it becomes clear that the songs and the movie — as complementary to each other as a lamp and its wick — uplift and inspire in a way that I have found nonpareil.

The beauty of Sankarabharanam is that it is but the first step of an incredible journey of discovery. SPB’s songs were the most important step that drew me into this journey. Over the years, I have watched the movie more than a dozen times, and each time, I discovered something new.

On each occasion, I have been drawn into watching the movie after I felt like listening to one of its eternal songs. After marvelling at the devotion the songs induce, I would feel inspired to unlock their meaning. Then, my appetite whetted, I invariably watched the movie to understand the context of the song. This process, from melody to meaning to context, has been a deeply enriching personal journey, as it has helped me understand the spiritual ethos we inherit as Indians.

Song with a message

A line from the last song in the movie, ‘ragalanantalu nee veyi roopalu bhava roga timirala pokarchu deepalu,’ captures beautifully the essence of this ethos. ‘Your thousands of forms are like the infinite number of ragas that dispel the darkness of worldly bondage’. That the divine can be attained through music (Nada Bramhan), through selfless action (Karma Yoga), through pursuit of knowledge (Jnana Yoga) or through sincere devotion (Bhakti Yoga) is a credo that carries in its embryo the truth that the divine can be attained through unshakeable faith in any religion.

In this context, I have realised how secularism in the Indian ethos is different from the Western conception. The subtle but crucial difference is akin to the difference between the numbers 0 and 1. Though adjacent to each other, metaphysically the numbers capture opposites: 0 conveys nothing while 1 captures entirety. The Western conception resembles the number zero, that is, no religion, while the Indian concept of secularism resembles the number one, that is, taking in the entirety of all religions, paths, faiths and beliefs. By being all inclusive, the Indian conception makes no distinction among them.

The film’s title song captures the many nuances of our spiritual ethos and the role of music. A key stanza describes music as life or essence (sangeetame pranamu) as well as the staircase (ganame sopanamu) for advaita siddhiki, to attain the state of Advaita or non-duality, where the worshipper and the worshipped merge into each other; for amaratva labdhiki, to gain immortality; for satva sadhanaku, undertaking penance to achieve harmony within oneself and thereby with the universe and all its beings; and for satya shodhanaku, the pursuit of the eternal truth.

SPB’s songs in this movie uplift one in so many ways. Take the song ‘Shankara, nada sharirapara.’ Every time I listen to it, I am moved not only by the bhakti embedded in it but also by the impact that pure devotion is shown to have on the divine. As SPB entreats the divine with his incredibly high notes that few can match, the clouds burst, affirming godly disapproval of social discrimination. The song also goads one to pursue one’s convictions irrespective of social criticism.

SPB’s last song in the film is by far the best as it embodies the virtue of niswartha seva or selfless service: ‘Dorakuna itu vanti seva?’ (Will I be blessed with the privilege to serve you?) It offers the greatest meaning to us public servants as the divine permeates every living being on this planet. Therefore, serving the people selflessly is ultimate service to the lord.

For offering us this inseparable complementarity between divine songs and an inspiring movie, SPB, you have lived your own words amaratva labdhiki, that is, gained immortality. Such lives must only be celebrated and not mourned.

The writer is the Chief Economic Advisor to the government.