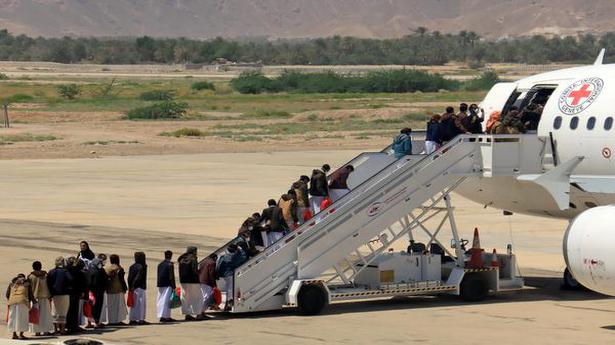 A hard-won prisoner exchange between the Yemeni government and Houthi rebels got under way on Thursday with the departure of the first planeloads of released combatants.

The warring sides in Yemen’s long conflict are to exchange 1,081 prisoners over two days under a deal struck in Switzerland last month, the largest number since the conflict erupted in 2014.

One of them was headed for the city of Abha in neighbouring Saudi Arabia with released prisoners of war from a Saudi-led military coalition that supports the Yemeni government, rebel officials said. Those on board included 15 Saudis and four Sudanese.

Planes are also due to depart from Abha and from the Yemeni government-held city of Seiyun in a complex operation overseen by the International Committee of the Red Cross (ICRC), rebel officials said. United Nations (UN) Yemen Envoy Martin Griffiths, who attended last month’s talks in Switzerland, hailed the successful start of the operation. “Today’s release operation, led by the ICRC, is another sign that peaceful dialogue can deliver,” the Envoy said.

The Yemeni government and the Iran-backed rebels resolved to swap some 15,000 detainees as part of a peace deal brokered by the UN in Sweden back in 2018. This week’s planned swap would mark the first large-scale handover since the war erupted in 2014.

“The transaction will be executed, with God’s help, on the scheduled dates today and tomorrow,” Abdel Kader Mortaza, the rebel official in charge of prisoner affairs, said in a tweet.

“The preparations have been completed by all parties,” he added.

A spokesperson for the International Committee of the Red Cross, which is handling the logistics of the operation, said their teams were present at the various airports involved in the transfer.

Huthi-controlled Al-Masirah television said the first group of rebel prisoners was expected to arrive at Sanaa airport later on Thursday.

The planned exchange comes after the release Wednesday of two Americans held captive in Yemen, in an apparent swap for some 240 Huthi supporters who were allowed to return home after being stranded in neighbouring Oman.

The rebels also sent back the remains of a third American who died in captivity.

The fate of the 240 Yemenis, who had travelled to Oman for medical treatment in what was supposed to be a confidence-building move during the 2018 talks in Sweden, had become a major grievance for the rebels and a symbol of the deep distrust between the two sides.